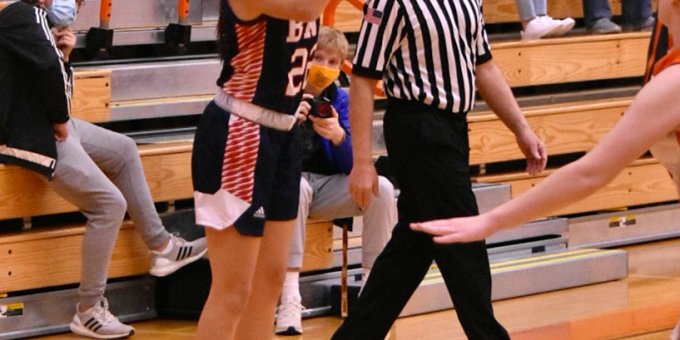 BEDFORD – With no rest for the weary and no sympathy for the conquered, Bedford North Lawrence is climbing on the treadmill for another high-level stress test. Those are designed to measure the heart’s ability to respond, and the Stars are about to find out exactly how strong their collective hearts are as they hit the road for another supreme challenge.

BNL, stung by Tuesday’s 67-66 loss during the conference showdown at Columbus East, will visit Class 3A No.1 Silver Creek on Thursday night. While the hype of the marquee match took a hit with BNL’s setback, which will certainly cost the Stars (14-2) the No.2 ranking in Class 4A when the new poll is minted, it does not squelch Silver Creek’s threat.

These Dragons (15-2) can breathe fire. And they will definitely be fired up to torch the Stars after last year’s BNL victory left burn marks. They have not forgotten the 66-35 firestorm that engulfed them and sent them home to lick multiple wounds.

“We were feeling really good about ourselves, and they put us right back in our place,” Silver Creek coach Scott Schoen recalled. “They popped us pretty good. There’s such a thing as being naive. From the coaching staff to players, we went up there really naive. They were locked in and they punched us right in the face. We didn’t react well to it.”

That night, BNL sought revenge for a summer scrimmage loss, and the Stars erupted to a 20-2 lead before the Dragons could exhale. Irye Gomez and Madison Webb scored 15 points each, Chloe McKnight totaled 13 and Karsyn Norman added 12. What was expected to be a tense contest was complete domination.

A year later, the script has flipped. Silver Creek seeks vengeance, and the structure of both teams has changed. The Stars are now guard strong, dependent on exterior firepower, speed and pressure, while the Dragons have added an interior force to complement their perimeter experience.

Louisville Eastern’s Marissa Gasaway, a 6-1 senior, transferred across the river to join the Dragons, and she was a perfect missing piece. She’s averaging 13.1 point and 13 rebounds, joining senior Alana Striverson (12.9), senior Jaclyn Emly (12.6) and junior Kynidi Striverson (11.8) in a potent lineup.

“There’s so many similarities from last year to this year,” Schoen said. “We’re better with her addition. Last year, with us being the type of team we were, we could shoot the ball really well. But if we weren’t hitting the three, or if we weren’t able to score in the paint on drives or post-ups, we struggled. She brings that extra element.”

Silver Creek already has signature wins to prove its worth, most notably over former 4A No.1 Crown Point (53-49) and defending 3A semistate champion Salem (58-56).

BNL, with its 10-game winning erased, will have to restart its momentum motor. Conquering the Dragons – BNL’s third straight high-profile clash in the last six days following Castle and East – would do that. What will BNL’s mindset be following the East loss? There’s no time for the Stars to sulk.

“I think that’s a good thing,” BNL coach Jeff Allen said. “It’s a tough opponent on the road, we’ll have to play well. But you don’t have time to dwell on the loss. You have to get ready for the next opponent. From that standpoint, it’s a good thing.”

From another standpoint, BNL will be at full strength. When this game was originally set for Dec. 17, BNL’s Irye Gomez was in virus quarantine and unavailable for the trip. She’s coming off a 20-point night at East.

Gomez is averaging 12.3 points per game. McKnight leads the Stars in scoring at 15.1 while freshman Chloe Spreen is totaling 14.3. The Stars were 11 of 37 from long range at East, recovering from the 24-3 nightmare start.

“It’s the way they play,” Schoen said. “They’re such a hard-nosed basketball team. They have fives guards that can step out, and all five can score. You have multiple college basketball players out there, They can shoot it, they can drive it, they run their stuff so well. Everything about them scares me.

“BNL is so disciplined and so well coached. We’re really exited about the opportunity to play them. It’s a great test for us to see where we are, a really good benchmark to see where we need to grow.”

Last meeting: Last year at BNL, the Stars exploded to a 20-2 lead and burned the Dragons 66-35. Irye Gomez and Madison Webb led four Stars in double figures with 15 points each. Kynidi Striverson had 9 points for Silver Creek.

Game notes: BNL surrendered 67 points at East, the most this season and the most since the 69-58 loss at Salem last year.