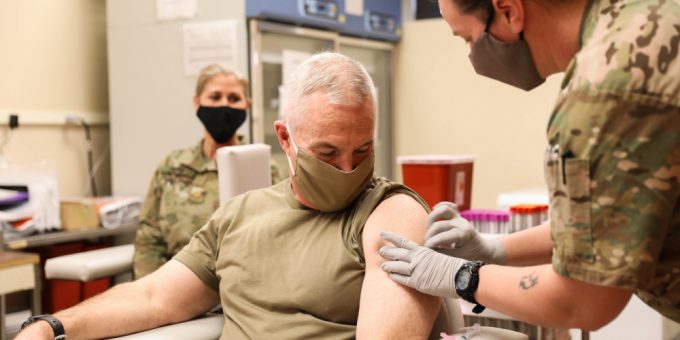 (FRANKFORT, KY.) – Soldiers and airmen can now get the COVID-19 vaccine should they want it.

The Moderna vaccine was picked up by the Kentucky National Guard and have started administering it to troops.

According to Col. Chris Howell, deputy commander of clinic operations for the Medical Detachment, approximately 42 Soldiers were given the vaccine on the first day.

“At this monumental time for America, and for the state, our mission right now is to attempt to vaccinate all our National Guard Soldiers and Airmen,” said Howell.

The number of vaccines distributed will come out in phases as the number of service members line up to get inoculated. Right now, the vaccine is available on a volunteer basis to Soldiers and Airmen 18 years old or older.

“Once we begin giving as many vaccinations as we have available, then we will re-order for what we anticipate coming down the pike,” added Howell. “If there are 300 vaccines needed, we are going to order that amount. Troops will get a PHA (Periodic Health Assessment) and they will also get the vaccination as well if it’s been asked for.”

For now, the Medical Detachment has received about 13 vials of the vaccine from the CDC that can be store for up to 30 days in refrigeration.

Senior guard leadership lined up to get their shot in hopes that others will follow their lead.

Lamberton shared that he had reservations about getting frontloaded for the vaccine due to how it might look to the lower ranking Soldiers and Airmen or as he says the ‘Rank Has Privilege’ crowd. He decided though, that being one of the first to get the shot would instill confidence in the vaccine for all other service members, particularly those who are most vulnerable.