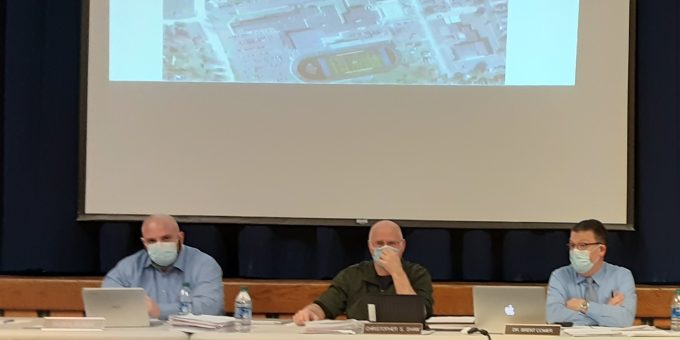 (MITCHELL) – The Mitchell Community School Board conducted a preliminary hearing on a proposed $17,035,000 Capital Improvement project for the school corporation Monday evening.

Dr. Brent Comer stated there will be several needs that will be addressed in this project, but also the corporation will be able to address some wants including new turf for the football, baseball, and softball fields.

Some safety concerns will also be addressed in these projects including the pick-up and drop off at Burris and Hatfield Elementary Schools.

The construction of an Auxiliary gym for the Mitchell Junior High School Students will prevent the need for those students to have to cross the roads on a daily basis for gym classes.

The timing of the project will also allow the corporation to take advantage of low interest rates. The payoff for the project is expected between 9-12 years.

The Mitchell Community School Supt. Brent Comer, along with the Mitchell School Board, wants to clearly emphasize that no tax increases to the local taxpayers by executing these projects will take place.

The Board President Chris Shaw and Superintendent Brent Comer want the public to be informed and transparent as they proceed with the projects.