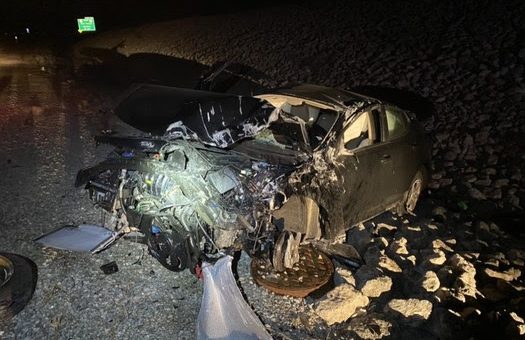 (FORT WAYNE) – Shortly after 7 p.m. Monday, an Indiana State Police Sergeant was patrolling on I-469 near Winchester Road, when he observed a black Kia Optima passenger car traveling eastbound at a speed over 110 miles per hour.

The trooper caught up with the Kia Optima to initiate a traffic stop near the South Anthony Boulevard extended overpass (10.5mm).

The driver, later identified as 18-year-old Soe La Mar, of Fort Wayne, immediately braked hard while entering a curve, which resulted in him losing control of the vehicle.

The vehicle entered into an uncontrolled spin, ran off the roadway to the right, and crashed in the ditch.  The car rolled over several times prior to coming to a stop.

The trooper immediately called for fire rescue and medical personnel to the scene.

The trooper said, amazingly, the driver was able to exit the vehicle on his own accord, suffering only a very minor injury, which can only be attributed to the effective use of a seat belt combined with vehicle airbag technology that successfully deployed.

The vehicle was removed from the scene by Blue Eagle Towing.

The driver was cited for charges related to speeding and reckless driving, charges which will be submitted to the Allen County Prosecutor’s Office.

Troopers at the Fort Wayne Post continue to see increased incidents of excessive high-speed violations (exceeding 100mph) on area highways. Troopers say operating at such high speeds is extremely reckless behavior, and even under the best road and traffic conditions, often leads to tragic outcomes. Drivers are urged to always abide by the posted speed limits and to drive with due regard and utmost concern for the safety of others.  Motorist that observe these high speed violations are urged to call 911 when safe to do so, and report these incidents so that law enforcement can intervene.