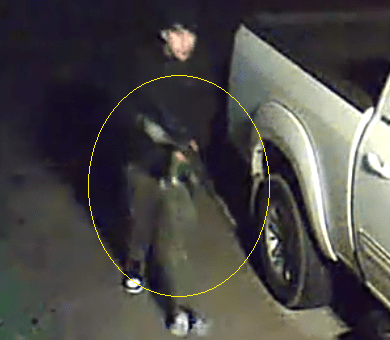 (INDIANAPOLIS) – Indiana State Police are investigating a theft from an ISP vehicle.

In the overnight hours of January 2 into January 3 an issued police handgun was taken from a marked state police vehicle parked in a private driveway.

The theft occurred in the Pine Springs West neighborhood near 75th and Hague Road in Indianapolis.

A surveillance camera on a neighboring home captured images of a white male carrying a rifle attempting to make entry into a white pick-up truck. Investigators believe these images were taken prior to the unlawful entry into the police vehicle, however, the close proximity leads investigators to believe the same male suspect is responsible for the handgun theft. The rifle the suspect was carrying was not the weapon stolen from the ISP vehicle.