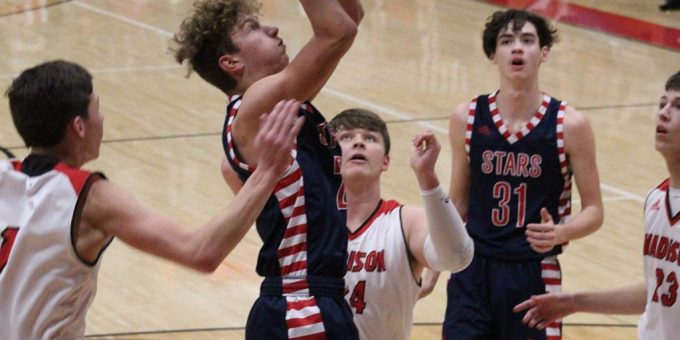 BEDFORD – For the second time this season, Madison will make the lengthy trip to Bedford North Lawrence, hoping this one lasts a little longer.

On Dec. 12, the Cubs were poised to make their belated season opener against the Stars, on site and already in warm-up mode. But just 15 minutes prior to the start of the junior varsity game, both contests were suddenly cancelled because of a positive virus test. BNL’s program was placed in immediate quarantine.

Exactly a month later, Madison will try again. The Cubs, now 7-2, will make their Hoosier Hills Conference debut on Tuesday when they revisit BNL Fieldhouse to face the Stars (4-5) in a varsity-only contest at 6 p.m.

Much has changed since that weird night in December. The Cubs have been busy, making up for lost time, while BNL suffered through its 10-day purgatory shutdown. Perhaps the teams are fortunate to play this time, since Madison’s junior varsity was just placed in quarantine. But at least Madison is no longer a mystery team, with video to study and scout.

“We have film on them now, which is a positive,” BNL coach Jeff Hein said. “The negative is they’re playing well. We didn’t know early how they would play. We have some film and have a chance to see what they do.

“Sherron (Wilkerson, Madison’s coach) likes to spread your defense out and attack off the dribble, penetration and kick for threes. It’s a different style, they like to get up and down and they like to play faster. Tempo will be big and we have to control that, one way or the other.”

The Cubs are certainly explosive, ranking 11th in the state in scoring at 76.9 points per game. That’s in stark contrast to the 36-30, slosh through the mud victory over ultra-deliberate South Knox on Saturday.

“We’ll go back to the drawing board and hopefully find a way to go 2-0 in the conference,” Hein said. “That’s our goal.”

Last year, the Stars won 64-55 as Brayton Bailey scored 27 points, grabbed 8 rebounds and handed out 6 assists. Many of those went to Jackson Miracle, who added a career-high 14 points. The Stars shot a blistering 65 percent (Bailey was 13 of 17) and went on a 12-1 run in the third quarter to take control.

Game notes: This is Madison’s final season in the Hoosier Hills Conference.