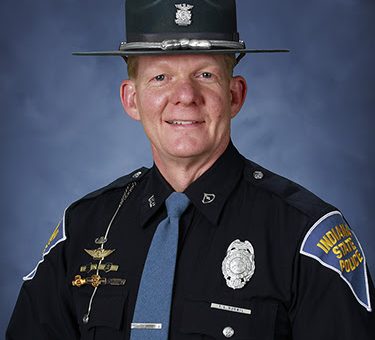 Master Trooper Durnil graduated from the 48th Recruit School on December 9th, 1990. Last month he received his awards from the Indiana State Police that consisted of a framed certificate and a longevity pin to be worn on the uniform.

M/Trooper Todd Durnil is a 1987 graduate of Edgewood High School. He attended Indiana University while serving in the United States Air Force. After graduating from the 48th Recruit School he was appointed as a Trooper and assigned to the Seymour District where he patrolled Jackson County.

In 1995 Durnil transferred to the Bloomington District where he primarily patrolled Monroe County. In 2004 Master Trooper Durnil was promoted as a member of the first Indiana State Police Motorcycle Patrol since the 1940s where he served as a Squad Leader until 2012.

In 2016 Durnil was promoted to the position of Commercial Vehicle Enforcement Officer and in 2019 he returned to the Bloomington District as a road Trooper.

M/Trooper Durnil and his wife have two adult children and reside in Monroe County.