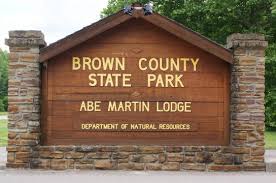 (BROWN CO.) – Brown County State Park is listed in the National Register as a historic district.

The park also was added to the Indiana Register of Historic Sites and Structures in October.

The property has a significant degree of historic integrity, retaining many original buildings and landscape features from its period of significance.

The north entrance is marked by a two-lane Burr arch-truss covered bridge that was originally erected in Putnam County in 1838 and relocated to Brown County in 1932.

The only remaining example of its kind in Indiana, the span known as the Ramp Creek Covered Bridge carries traffic southward over Salt Creek into the Park, and northward out of the park.

The national listing is the culmination of at least four years of research and documentation by Indiana Landmarks staff and the Indiana Department of Natural Resources, with support from local group Peaceful Valley Heritage.

Indiana Landmarks staff identified 69 features they believed would contribute to the park’s significance, from horse trails that used to be county roads, to the iconic vistas, to structures built by members of the Civilian Conservation Corps (CCC) in the 1930s and ’40s in the “park rustic” style. In total, 152 park features are highlighted in the nomination.