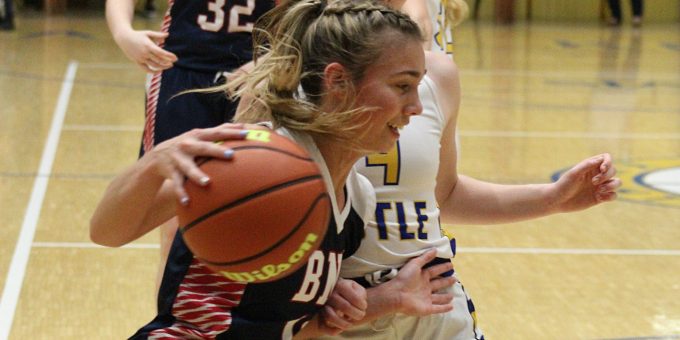 BEDFORD – “Mirror, mirror, on the wall. Who’s the fairest one of all?”

That question is constantly asked, not in terms of vanity but competitive attraction. The answer will be revealed when Class 4A No.2 Bedford North Lawrence faces mirror-image Castle on Saturday afternoon. Both are more like basketball evil queens than Snow White because of their identical tenacity and fierceness, but there is stunning beauty in their similar styles.

The Stars (13-1) and the No.12 Knights (8-2) are identical in so many ways. Defensive pressure. Offensive balance. Maximum effort. It’s team basketball in its purest form. It promises to be a bombshell clash. There is mutual respect from both sides.

”It will be two bunches of kids that really go after it,” BNL coach Jeff Allen said. “They like pressuring the basketball, and that’s our forte. They get up and down, they get after it. It doesn’t take them long to find a shot they like. So it will be entertaining.

Let’s gaze at Castle first. The Knights have suffered through two virus quarantines and dropped their first two games after the first shutdown, falling to former No.1 Crown Point (by a point) and Columbus North in late November. Since then, Castle has won seven straight by an incredible average of 39.2 points.

They have multiple looks with junior Natalie Niehaus (12.1 points, 8.0 rebounds), junior Jordan Coon (9.6 points) and junior Ky Hay-Swope (8.9) leading the way. Castle is allowing only 32.4 points per game, ranked 12th in the state.

“I am extremely proud of the effort and buy-in from the ladies,” Castle coach Bob Meier said. “We have had to quarantine twice, which makes consistency a challenge, but they are doing an incredible job of growing and developing in the time we have had. Conditioning has been one of our main hurdles. The stronger our conditioning is, the more capable and confident we are able to play.”

Now look at the Stars. They’re forcing 23 turnovers per game (with 13 steals). They have a dynamic offense, fueled by those transition points, with freshman Chloe Spreen (15.4), senior Chloe McKnight (15.0) and senior Irye Gomez (11.5) as the leaders. Guards Karsyn Norman and Jenna Louden are both averaging over 3 assists per outing.

“Coach Allen has another wonderful team with a lot of solid options,” Meier said. “We are similar in that we have both been blessed with size the last few years and are having to find success with less height.

“McKnight continues to develop into a very well-rounded player. She has always been an excellent shooter, but you can see her confidence continues to grow in all parts of her game. She will be a tough matchup for us. Spreen is wonderful player, especially for a freshman.”

BNL’s only offensive issue has been 3-point accuracy (100 of 303). McKnight and Gomez have been deadly from there. From inside the arc, especially on the run following turnovers or missed shots, the Stars have outstanding numbers. They had four players in double figures during the destruction of Bloomington North on Tuesday.

“I was happy to see that,” Allen said. “It’s always helps to see the ball go through the rim. We’ve had some kids have some tough nights. So seeing the ball go in, hopefully that will get them going.

“We’re not good enough to rely on the big post player. We don’t have one. Or rely on super athletes. I don’t know that we have those. So these kids counter that by playing as hard as they can. It makes us really good defensively.”

BNL won last year’s collision 48-43, rolling to an 11-point lead midway through the fourth quarter before the bulk of its 17 turnovers almost proved costly. Castle applied full-Nelson pressure and scrambled within 44-42 with 1:15 remaining. Madison Webb sank two clutch free throws with 56.5 seconds left, and Gomez broke free for a final layup to secure the win.

Gomez paced the Stars that day with 13 points while McKnight had 12. Niehaus, BNL’s defensive target, was only 2 of 12 from the field and totaled 7 points. That will be difficult to duplicate.

“Niehaus is a really nice player, and they have pieces around her,” Allen said. “They’re not a big team, they match up well with us. So it will be a fun game, a toe-to-toe slugfest.”

Last meeting: Last year at Castle, BNL won a defensive battle 48-43. Irye Gomez had 13 points and Chloe McKnight added 12 for the Stars. Carly Harpenau had 10 points for the Knights.