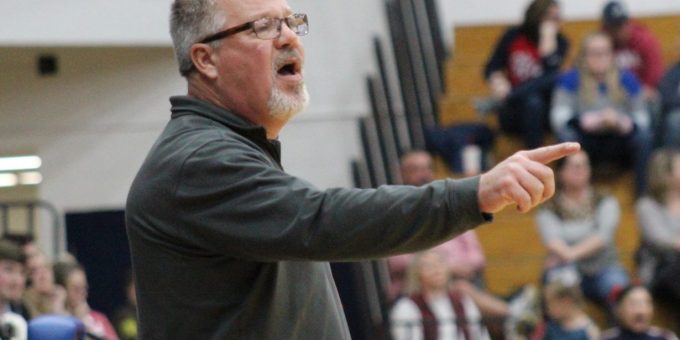 BEDFORD – Many basketball programs have suffered during the dark days of the COVID-19 epidemic. Evansville Reitz could make a credible argument for a high ranking among those who have endured the most.

When the virus first made its presence felt in March, Reitz was one of 64 sectional champions in Indiana, ready to continue its postseason drive. The Panthers had even boarded the bus to depart for Seymour when the IHSAA announced the unprecedented cancellation of the regionals and the remainder of the state tournament.

Next, during the spring shutdown in May, star guard Khristian Lander – a definite Indiana All-Star and Mr. Basktball candidate – decided to reclassify as a senior and enroll early at Indiana University. Reitz’s huge loss was IU’s gain.

Finally, after playing its season opener on Dec. 4, the Panthers were forced into quarantine as team members because ill. They didn’t return to practice until the week after Christmas, lost five games during the idle time and didn’t play again until Tuesday. That’s not flattening the curve, that’s crushing the spirit.

So far, Reitz has not shown any signs of disintegration or decay. The Panthers are rolling again, 2-0 as they prepare to host Bedford North Lawrence (3-4) on Friday night.

Reitz started with a 78-48 victory over Vincennes Lincoln, then came back from the month exile with a 79-60 win over Jasper. The Panthers, known for their pressing attack and high-octane offense, have multiple weapons in 6-7 junior Gavin Schippert (17.0 points), 6-7 wing Owen Dease (16.0) and senior forward Ethan Higgs (12.5).

“They’re not missing a beat,” said BNL coach Jeff Hein, who had to figure out how to scout an opponent who had not played. “They have a lot of talent. It’s hard to contend with. Dease goes out and shoots from 30 feet, he’s a tough match because he can go inside, and he likes it on the perimeter. He gets out in transition.

“That whole team likes to run. In a lot of ways, they’re similar to Silver Creek in the way they play. They’re a team that will press and trap. They’ll make you play, make some decisions. Hopefully we can make a few more shots.”

BNL has not shown that kind of offensive explosiveness, averaging only 47.9 points per game. After winning three straight, the Stars have dropped back-to-back games to Castle and 3A No.3 Silver Creek. Sophomore Colten Leach leads the team in scoring at 11.0, and Ben Cosner is contributing 10.6. They’re currently alone in the double-figure category.

“We need to shoot better,” Hein said. “We got good shots (against Silver Creek, although the Dragons blocked 10 shots). Leach had a great game (12 rebounds and 8 assists), and it was good breakout party for Aden (Pemberton, a career-high 17) to score a little bit. He does all the other things.”

Reitz won last year’s clash at BNL Fieldhouse, as Lander scored 25 points and Dease totaled 15. Brayton Bailey paced the Stars with 22 points and 12 rebounds. The Panthers hit 11 of 13 treys in the first half and held BNL to three points in the third quarter. The Stars can’t afford to allow either again.

“They try to wear you out and they have good depth to do that,” Hein said. “We have to stay in the game for three quarters, give ourselves a chance in the fourth, and hopefully this time find a way to execute and find a way to win.”