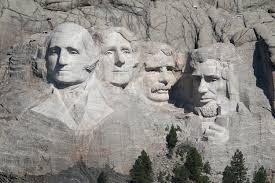 Molly Venderley, 20, entered a guilty plea to a single federal charge of illegally climbing the national memorial in federal court in Rapid City, South Dakota on Monday. Two other misdemeanor charges were dropped as part of a plea deal.

Venderley was fined $1,250 after entering her plea and was ordered to be released by U.S. Magistrate Judge Daneta Wollman.

A report from a park ranger said Venderley told him she climbed in the dark on Sunday because she knew it was against the law to scale the monument and knew the park was closed.

The ranger saw the woman’s flashlight on a security camera. Venderley made it to the base of George Washington’s lapel some 200-feet up the colossal stone monument in the Black Hills.

Venderley was “sober, cooperative and uninjured” according to law enforcement reports, but a ranger found a bottle of champagne and a fake ID after searching Venderley’s vehicle in the memorial’s parking lot.

Venderley was later taken to the Pennington County Jail while her car was towed.

Multiple signs at Mount Rushmore warn visitors that it’s illegal to climb the talus slope — the pile of broken rocks at the base of the monument — and the sculpture itself.

The monument, depicting the giant faces of four U.S. presidents, including Washington, Thomas Jefferson, Theodore Roosevelt, and Abraham Lincoln, was completed in 1941.