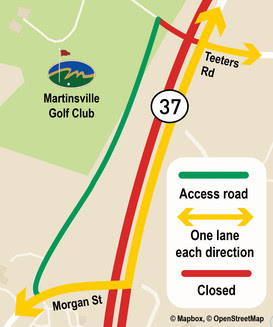 (MORGAN CO.) – State Road 37 is now closed in Martinsville to allow for faster and safer construction of the new I-69 between S.R. 39 and Morgan Street.

Several east-west roads will remain open throughout the closure to provide local access across S.R. 37. Local traffic in Morgan County is encouraged to make hands-free use of mapping apps that include real-time traffic.

Lane closures north of Martinsville
Starting on or after Wednesday, I-69 Finish Line contractors will use lane striping and orange barrels to reduce S.R. 37 northbound to one lane north of the closure. Crews will be working around the clock, starting at Morgan Street in Martinsville and moving north to S.R. 144 in Johnson County.

Temporary concrete barriers will then be installed along nearly 12 miles of S.R. 37 before both directions are shifted to the northbound lanes of the highway, which is anticipated by late January. The restrictions will allow road crews to build the new southbound lanes for this section of I-69.

Until then, S.R. 37 southbound traffic should watch for intermittent daytime lane closures where crews are clearing trees. The speed limit in the work zone is reduced to 45 mph.

Local road closures
As the restrictions progress north, some local access points to S.R. 37 will close. Martinsville Golf Club will use a temporary driveway that connects with Morgan Street near Prince of Peace Lutheran Church.

Myra Lane west of S.R. 37 can use the new overpass connecting Old S.R. 37 with Egbert Road and the temporary S.R. 37 traffic signal at Henderson Ford Road.

During this first phase of construction, Teeters Road and Myra Lane east of S.R. 37 will be right-in, right-out intersections. This means that S.R. 37 northbound traffic can turn right onto Teeters Road and Myra Lane, and the local road can turn right onto S.R. 37 northbound. Barrels, striping and eventually concrete barriers will prevent left turns at these intersections.

Throughout 2021, three local roads between S.R. 144 and the Martinsville closure will maintain full access to S.R. 37: Banta Road, Henderson Ford Road and Morgan Street. Click here to view a map.