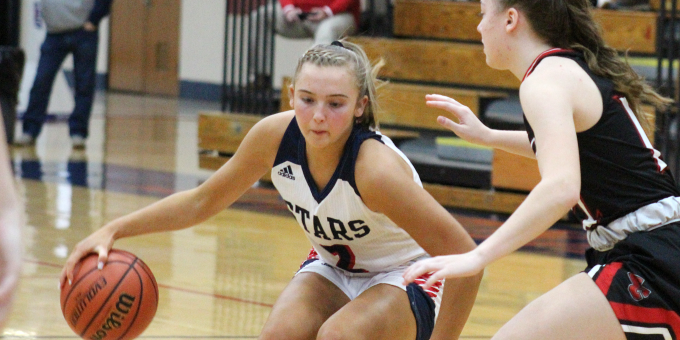 BEDFORD – During Bedford North Lawrence’s current eight-game winning streak, which includes a couple of impressive victories over high-caliber competition, defense has been the common denominator.

That’s the way coach Jeff Allen likes it. That’s the way it should be. Shooters, even the best, can miss. Defenders usually do not suffer slumps.

The No.6 Stars (12-1 and likely to climb higher when the new poll is released) are allowing only 40.8 points per game, and they’ve limited five of the last seven victims under that mark. The latest smothering performance was Saturday’s shutdown of Class 4A No.4 East Central, which could not find any cracks in BNL’s wall while scoring only 25 points.

Ball pressure on dribblers. Quick hands in passing lanes. Help on the interior. Moving feet rather than reaching hands. BNL was almost flawless in all the important defensive phases. In Allen’s eyes, there was beauty in that performance.

“That’s one thing I’m always going to talk to my girls about,” he said. “I don’t care who we’re playing. If we play with that level, we’ll be hard to play with.”

There is, of course, the caveat: “If we play with that level of intensity on the defensive end,” he emphasized.

BNL’s focus will be tested on Tuesday when the Stars host Bloomington North. The Cougars (5-9) are not formidable in terms of firepower, record or ranking. The Stars just don’t want a letdown.

During its nine-game winning streak in the series, BNL has held North under 30 in seven of the last eight meetings. That includes last season’s 68-18 triumph, when the Cougars managed only six field goals.

BNL will not overlook the Cougars. Sharpness requires vigilance. And the Stars still have some offensive kinks to smooth. They scored only 36 points against East Central, and they’ve not shot well from the perimeter since burning Jeffersonville with those 18 treys. Even layups were a problem against the Trojans.

“It would be nice to see some layups,” Allen said. “But anytime you can beat a team of that caliber, you’re doing something right.

Chloe McKnight (15.2) and Chloe Spreen (15.1) continue to lead the Stars in scoring, with Irye Gomez adding 11.7. All five starters (including Karsyn Norman and Jenna Louden) are averaging over two steals per game.

Last meeting: Last year at North, BNL limited the Cougars to six field goals while blasting to a 68-18 victory. Chloe McKnight had 18 points for the Stars.

Game notes: BNL has won nine straight games in the series. BNL is now ranked third in the state by the Sagarin computer ratings.