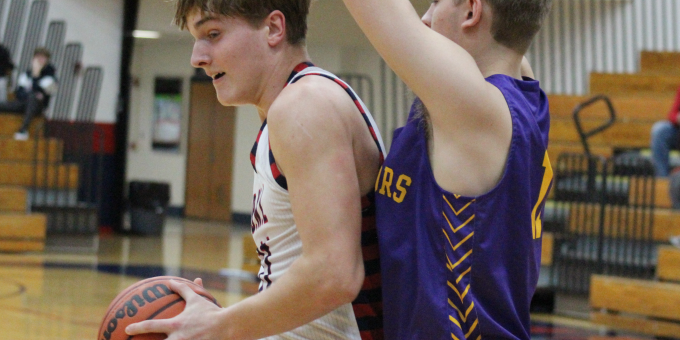 With three Div. I recruits, including one of the preseason favorites to win the coveted Mr. Basketball award, Silver Creek has unmatched top-shelf talent. Don’t let the 6-2 record – losses absorbed with one of the trio sidelined – undermine that stance.

Silver Creek will unleash its full firepower against Bedford North Lawrence when the Stars make the road trip to Sellersburg on Saturday night. For the first time in weeks, the Class 3A No.3 Dragons will have Purdue recruit and Mr. Basketball contender Trey Kaufman, Toledo recruit Kooper Jacobi and point guard Branden Northern back together. The Stars (3-3) better have the shields up.

Kaufman, the 6-10 forward who chose the Boilermakers after being chased by Virginia, Indiana, North Carolina and others, missed three games with an ankle injury. Northern, the son of former Louisville and Jeffersonville standout Bryant Northern, sat out recently in virus quarantine. BNL, of course, will have the fortune of seeing the Dragons at their best.

Jacobi leads Silver Creek at 30.1 points per game, including a 44-point explosion against Columbus East. Kaufman is averaging 25.6, and Northern adds 23.3 (with a 32-point, 6-assist performance against 2A No.1 Blackhawk Christian). Silver Creek ranks seventh in the state in scoring at 79.9, after lashing East with 106 and blasting Clarksville for 95.

“We have nothing to lose. We’re not supposed to go down there and beat them,” BNL coach Jeff Hein said, although he won’t approach the game with that mindset. Upsets happen all the time. “It’s one of those games that will make you better, that you have to play. They’ll force you to play.”

Technically, Silver Creek is still the defending 3A state champion. The Dragons won the title in 2019 and were poised to seek a repeat crown when the virus descended and forced the IHSAA to cancel the 2020 tournament after the sectional round. The unknown still exists.

“It’s been one of those years, like everyone else, we’ve been juggling pieces,” Silver Creek coach Brandon Hoffman said. “Fingers crossed, we’ll have everyone back and ready to go.

“This year is so different, so we’re still not near our ceiling right now, in terms of being our best. But we’ve been working with these kids since third grade, and this is another year of experience. Everyone is more mature and they’ve improved their games. I’m just relishing the chance to coach them again. It’s a special group we’re blessed to have.”

Without Kaufman, the Dragons were slain by North Harrison (63-61) and Blackhawk (94-84 in double OT) on back-to-back days in mid-December.

“If there is a silver lining, it was the opportunity for everyone else to raise their game, challenge them to do more,” Hoffman said. “The guys that don’t get as much press have all had great seasons so far. It gives them more confidence and will make us better in the long run.”

BNL won’t back down, definitely did not during last year’s clash at BNL Fieldhouse. The Stars limited Jacobi (16 points) and Kaufman (10) to mere mortal numbers, but Northern (who has been offered a scholarship by Alabama A&M) scored 28 points as the Dragons prevailed 65-52, pulling away late in the final quarter.

“We played them really well,” Hein said. “Northern killed us. He shot it well (hitting three treys and going 11 of 13 at the line), which is not what we expected.”

“They played us a really good game and it was one of our tougher games of the season,” Hoffman said. ”They have some shooters we’ll have to be aware of. It will be an exciting game.”

To make it exciting, the Stars will have to raise their level of offensive execution. They showed flashes of that during the three-game winning streak, then took a step backward during Wednesday night’s loss to Castle.

“The thing that really bothered me was how passive we were the whole night,” Hein said. “We weren’t aggressive at all. If we play like that, we turn the ball over (17 times against the Knights). We have to be a lot more aggressive and go at them. The passiveness doesn’t get it done. I was disappointed in the way we played. We kind of reverted back to the first two games. We can’t play that way and expect to beat anybody.

“Silver Creek will force us to play, to get up and down the floor. They’ll extend their defense and use their athletic ability. It will be a challenge.”

Sophomore guard Colten Leach, who has been handed the reins of the attack, leads BNL in scoring at 11.6. Kooper Staley has climbed to 11.0 after the double-blank start, and Ben Cosner is contributing 9.8.

Last meeting: Last year at BNL, Branden Northern scored 28 points as the Dragons fought off the Stars 65-52. Brayton Bailey had 23 points for BNL.

Game notes: Silver Creek has won five of the six games in the series. BNL’s only win was a 50-25 triumph three years ago.