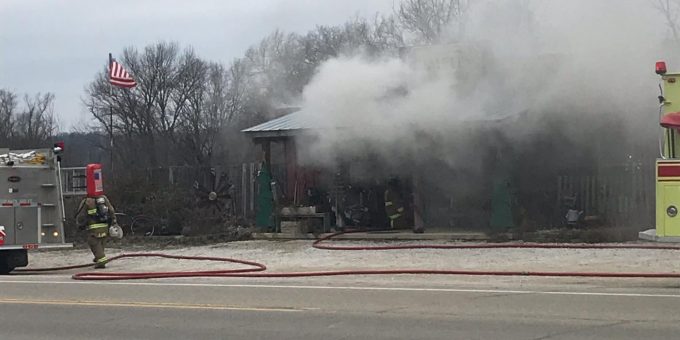 (BEDFORD) – Firefighters from Shawswick, Oolitic, and Pleasant Run Volunteer Fire Departments were able to extinguish a blaze at Timeless Treasures on Monday afternoon.

More than 20 firefighters responded to the scene at 1749 US 50 East with eight fire engines. Officers with the Lawrence County Sheriff’s Department diverted traffic from the area while firefighters battled the blaze. Tabernacle of Praise and an ambulance crew also assisted at the scene.

According to Shawswick Volunteer Fire Department Chief Bob Brown, the fire started in the basement area in the woodshop.

“The fire traveled up a post to the upstairs,” added Brown. “There was minimal fire damage upstairs, but there was heat and smoke and some water damage. The owner has equipment that is still salvageable.”

The owners of the business are Beck and Steve Allen.

No one was injured while battling the fire.

Brown says the cause of the fire remains under investigation.