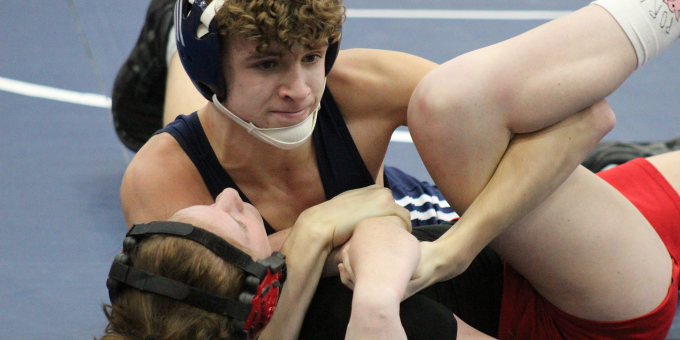 BEDFORD – After extended down time, mat time was crucial as Bedford North Lawrence returned to action during an impromptu, last-minute scheduling of three matches on Wednesday.

The Stars recorded two wins, conquering West Washington (46-30) and North Knox (42-24) before falling to Scottsburg (36-30) in a competitive finale.

BNL’s last match action came at Bloomington North on Dec. 10, and the Stars were forced to idle time on the sideline for all practices when the school shut down extracurricular activities from Dec. 14-18. BNL cobbled together this four-team event and took advantage of the pre-holiday work.

“That was the biggest thing, mat time,” BNL coach Chris Branam said. “It’s all about how we finish the season, so we’re out here to get matches in and mat time in, even when they don’t go our way.”

Most matches went BNL’s way against the Senators as the Stars took five of the six contests on the mat. Gabe Nelson pinned Mason Jones in 5:13 at 113 pounds, Byron Kyger flattened Evan Willis in 36 seconds at 160, Conner Smith conquered Shevin Griffith 12-4 at 170, Gunner Connaughton pinned Cannon Roop in 1:57 at 195, and James Covey topped Morgan Griffith in 38 seconds at 220.

BNL won four matches against the Warriors. Brax Huber downed Aubrey Smith in 1:00 at 132, Reese Hamblen hammered Austin Gruibel in 1:38 at 145, Kyger pinned Grayson Conrad in only 19 seconds at 160, and Connaughton downed Isaiah Mackey in 2:28 at 195.

”We came out on fire,” Branam said. “We looked good overall. Byron had two good matches. He started with a lot of energy and looked sharp.”

The Warriors won four of the five contested matches in the final round. James Covey, who suffered his first defeat of the season against North Knox’s Beau Nolan’s, bounced back to deck Bryce Mack in 37 seconds at 220.

“It was sad to see James take his first loss,” Branam said. “He got caught, it happens to everybody. You don’t lose, you learn.

“The last round we let up a little bit, didn’t wrestle as sharp as we could have. We let up the pace a little bit, and that hurt us.”

The Stars are scheduled to compete at Southridge on Dec. 30.