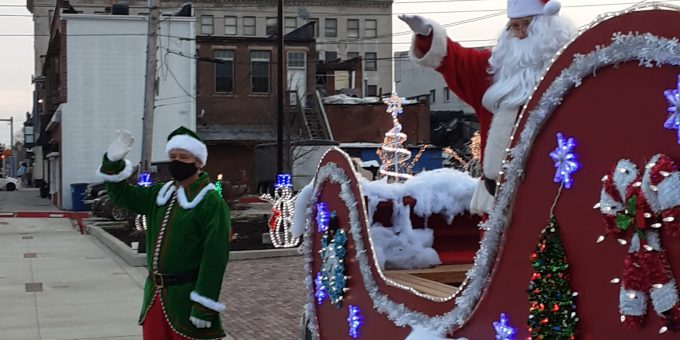 (BEDFORD) – The Bedford Parks Department was very disappointed in not being able to host the annual meet Santa and Mrs. Clause at Otis Park this year.

But even as the “Grinch” tried to steal Christmas, the Bedford Parks Department employees, along with other city officials, worked together to bring some holiday cheer to the children of the city.

On Friday and Saturday of last week, Santa parked his sleigh outside the Milwaukee Depot and his elves joined him in bringing smiles to everyone. Many parents come around a second and third time just so they could see the Jolly Old Man again.

“This went better than I expected; it was wonderful to see many enjoy this event,” said Mayor Sam Craig. “We wanted to find some way to allow the community to enjoy this holiday season with COVID-19 and the restrictions making the normal holiday events impossible. We had to cancel the parade and disappointed a lot of people. We hoped in some way this helped bring a little festive atmosphere to local residents,” said Mayor Sam Craig.

“We want to thank the Bedford City employees for bringing this event together in such a short time period,” added Mayor Craig.

After the Santa and his sleigh event over the weekend was over, the Bedford Parks Department left many holiday decorations up to allow the community to pass by and view them during the evening.