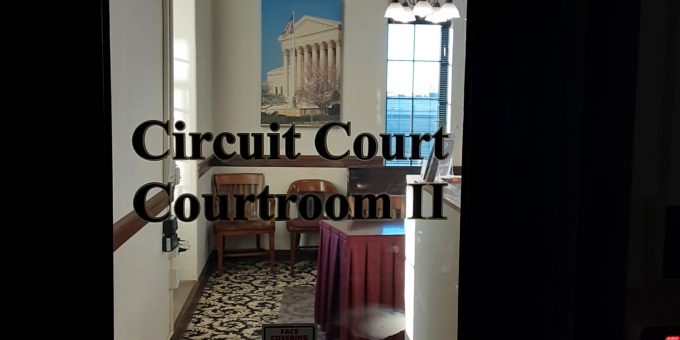 (LAWRENCE CO.) – The Lawrence County Commissioners approved a auxiliary courtroom to be constructed in the Courthouse Plaza contingent on costs.

The plans for the 3,100 square foot courtroom were presented to the Lawrence County Commissioners by Judge William Sleva. One of the concerns brought up by the commissioners was that the cost estimate was not included in the proposal.

The suggestion by Lawrence County Attorney David Smith to go ahead and approve the proposal, but contingent on the total cost for the project, was granted by the commissioners.

The commissioners have requested that bid specifications and costs for the project be identified before the project can move forward.

Additional courtroom space is needed for jury trials. A courtroom being used for juvenile cases and CHINS is located in a small room where hearing in that room is difficult causing distributions throughout the proceedings.

“At this time we have been able to keep up with our current caseload. But, if it continues on the path we are on, we may have to look at getting another judge or magistrate,” said Lawrence County Circuit Judge Nathan Nikirk.

Judge Sleva wanted to at least get the approval before he leaves the bench in January. Sleva will be serving as a Senior Judge over the next few months in order to preside over cases that Lawrence County Superior Court II Judge Bob Cline is not able to hear.

Total case load for Lawrence County Courts at the end of the third quarter:

The Lawrence County Circuit is the busiest of the three courts. They hear confidential cases, CHINS, juvenile, and civil litigation. The Superior Courts may have murder cases that take much more time to dispose of those cases and require a lot of time before they work through the legal system.

The Indiana Supreme Court continues to monitor the caseloads for all of Indiana’s courtrooms making recommendations on how to address the increase in caseloads.

“I think this will work out for the commissioners, courts, and the county as a whole,” stated Judge Sleva.