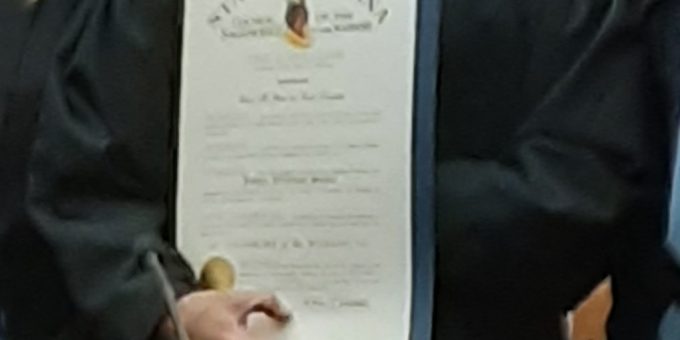 (BEDFORD) – Judge William “Bill” Sleva has been on the bench for more than 32 years. This morning following the swearing-in of his replacement, Lawrence County Superior Court II Judge Bob Cline, Judge William Sleva was honored with the Sagamore of The Wabash by Indiana State Senator District 44 Eric Koch.

Judge Selva has dedicated himself to the Lawrence County community and the State of Indiana to the rule of law.

Eric Koch has been practicing law for over 31 years and stated that Sleva has been the only Judge of Lawrence County Super Court II during his years as an attorney.

“I believe the problem-solving court is probably one of my proudest accomplishments,” said Judge Sleva. “Without the prosecutors we would not have such a court,” Sleva added.

“I am still amazed at some of their histories; I reflect back to one gentleman who started using drugs at the age of thirteen. And he stated to me he was finally happy after graduating the course,” said Judge Sleva.

“I have some mighty big shoes to fill, but I plan to live up to the precedent that William “Bill” Sleva has created,” said Lawrence County Superior Court II Judge Bob Cline.

The Sagamore of the Wabash award was created during the term of Governor Ralph Gates, who served from 1945 to 1949. Governor Gates was to attend a tristate meeting in Louisville with officials from the states of Ohio and Kentucky.

Aides to the governor discovered that the governor of Kentucky was preparing a Kentucky Colonel certificate for Governor Gates and Senator Robert A. Taft, who to represent the State of Ohio. The Hoosiers decided that Indiana should have an appropriate award to present in return.

The term “sagamore” was used by the American Indian Tribes of the northeastern United States to describe a lesser chief or a great man among the tribe to whom the true chief would look for wisdom and advice.

Each governor since Gates has presented the certificates in their own way. It has been said that one governor even resorted to wearing full Indian headdress as he read the scrolls.

The award is the highest honor, which the Governor of Indiana bestows. It is a personal tribute usually given to those who have rendered distinguished service to the state or to the governor. Among these who have received Sagamores have been astronauts, presidents, ambassadors, artists, musicians, politicians, and ordinary citizens who have contributed greatly to our Hoosier heritage.

It should be noted that the Sagamores have been conferred upon both men and women. There is no record of the total number which have been presented, as each, the governor has kept his own roll; just as each has reserved the right to personally select the recipients.