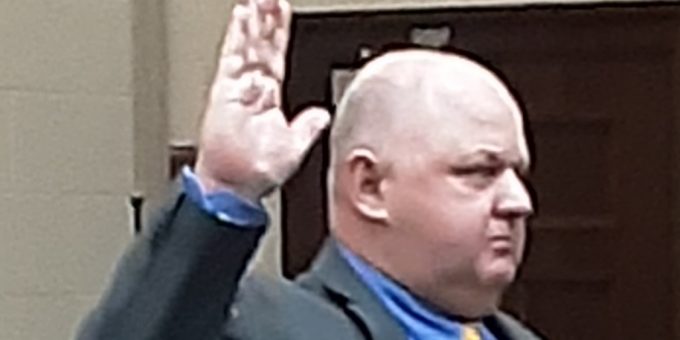 (BEDFORD) – Bob Cline was honored to be sworn in as the next Lawrence County Superior Court II Judge by the man who held that elected position for more than 32 years.

Several members of his family watched as William “Bill” Sleva delivered the oath of office.

Judge Cline will take office January 1st, 2021 and has served several years as a deputy prosecutor in Lawrence and Morgan Counties.

From 2004 to 2019 Cline has served as Judge Advocate General Officer training soldiers on law of war and ethics. He was also a legal advisor to military commanders in a broad range of legal military issues, and has been military defense counsel with court martial trial experience.

In 2015, Cline served as an adjunct professor for a forensic science class to over 60 students at Indiana University.

Cline graduated in May 2000 from Indiana University of Law. He also attended Purdue University and graduated with a Bachelor of Arts in Law and Society in 1992.

Cline has helped with the Lawrence County Problem Solving courts with those who face drug convictions and offering treatment options available to those who have legal issues.