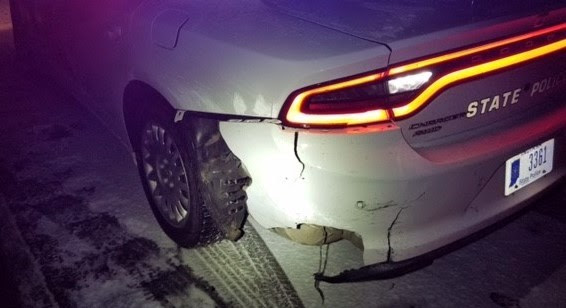 One of those crashes involved a trooper’s patrol car that was struck while investigating a previous crash.

At approximately 10:20 p.m. Trooper James Bailey was on I-69 investigating a crash near the southbound 328.4-mile marker, just south of Auburn. Trooper Bailey’s patrol car was parked on the right shoulder of the southbound lanes providing traffic control with emergency lights activated when it was struck by an approaching 2007 Chevy passenger that lost control on the icy roadway.

According to a police report, 49-year-old Timothy H. Jones, of Fort Wayne was attempting to reduce his vehicle speed as he approached the emergency vehicles at the initial crash scene.  While braking, Jones lost control of his vehicle on the icy road surface, then striking Trooper Bailey’s patrol car in the driver side rear corner. After striking the patrol car, the vehicle spun around and came to a stop facing northbound in the southbound lanes in the middle of the interstate.

Both vehicles had to be towed from scene due to disabling damage.

As we enter into the winter weather season, the Indiana State Police would remind all motorists of the importance of driving with due regard for road and weather conditions, especially when approaching law enforcement and other emergency vehicles that are working on our roadways.  It is imperative that all motorists drive without distraction and pay attention to the dangers that may lie ahead, especially during inclement weather. Too often Troopers find that a motorist that was unable to maintain control of their vehicle prior to a crash, was normally a motorist that was traveling too fast for the current conditions

Indiana traffic law specifically states and requires that motorists shall drive at a speed not greater than is reasonable and prudent for the given weather or road conditions…, and upon approaching an authorized emergency vehicle (a driver) shall proceed with due caution… and maintain a safe speed for road conditions…

Please remember to buckle up, reduce your speeds, and drive with due regard for the safety of yourself, your passengers, and other motorists sharing the road this winter season!