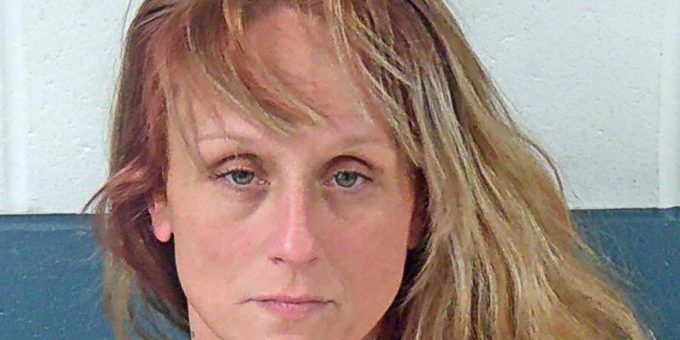 (OOLITIC) – An Oolitic woman was arrested after police say she was dealing meth, and was found with stolen credit cards and jewelry.

According to a probable cause affidavit, on Sunday, November 11, 2020, an Indiana Conservation Officer was patrolling in Lawrence County when he saw a vehicle pulled into a field with headlights shining and a green laser-like light illuminating the field and trees. Police say it appeared that the people in the vehicle were spotlighting the field for deer.

The officer approached the vehicle and the driver put the vehicle in reverse and attempted to leave. The driver was ordered to stop.

The driver Richard Roach told police he was testing his new firearm mount laster to see how far it went.

The officer then learned Roach was driving on a suspended driver’s license.

The officer then asked his passenger, Claire Stinson, if she had a valid driver’s license. She did not. The officer said Stinson had a hood over her face, was slouched in the seat and kept putting her hands in a backpack. She then told police a false name and a false birth date.

Stinson then began crying and told police her real name and that she had a warrant for a probation violation.

The officer then asked to search the vehicle and Roach consented.

In the back seat, the officer found an ammo box with multiple, loaded magazines. The also surfaced a backpack containing a scale with meth residue.

Stinson’s wallet contained two state ID cards belonging to her. Upon further research the officer found two credit cards, an identification card and a birth certificate that belonged to someone else. A glass smoking pipe, two grinders with 30 small baggies were also found. During the vehicle search a large amount of jewelry throughout the vehicle and in Stinson’s purse were also discovered.