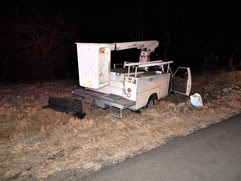 Around Midnight, Clark County dispatch advised that a “boom” truck, allegedly stolen in Kentucky, was possibly en route to the Charlestown, Indiana area.

The vehicle struck stop sticks deployed by Troopers and Clark County Deputies on State Road 62 but continued on the highway. The truck then traveled eastbound in the westbound lanes of State Road 62 before finally coming to a stop after running off the south side of State Road 62 just east of Logistics Avenue. The driver exited the vehicle and fled into a wooded area but was taken into custody after a brief foot chase.

The driver 33-year-old Ronald A. Patterson, of Louisville, Kentucky was arrested. During an inventory of the truck, officers discovered a glass smoking pipe containing meth. Also, they learned that Patterson was wanted on parole violation warrants in Kentucky.

The investigation into vehicle theft is ongoing.