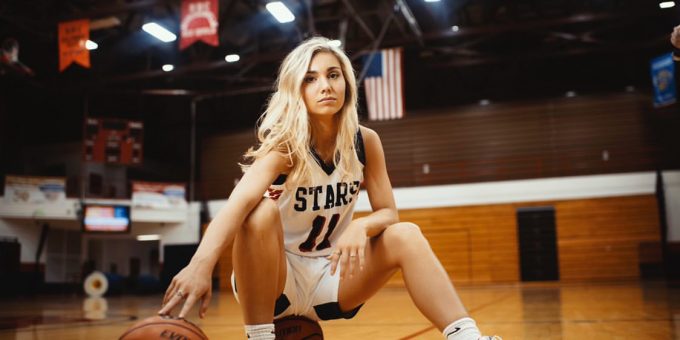 Eight members, spanning the entire era of BNL basketball, who have chiseled their names into the limestone rock of greatness, into the priceless stories of an Indiana hoops institution. The legacy of the Lady Stars lives forever among these names: Inman, Allen, McBryde, Pritchett. What a Mount Rushmore of BNL basketball that would make.

McKnight, honored to be mentioned among that BNL aristocracy, comes from a royal basketball bloodline. Her grandfather is a Hall of Famer, her uncle was a key part of the 1990 state championship, and she inherited that shooting gene from the Bush line. The rest of it – the growth in toughness, in leadership, in her total game during her four years – she learned and earned the hard way.

When she arrived at BNL as a scrawny, dainty freshman, her reputation preceded her. McKnight could shoot. And that was about it. Defense was a nuisance, rebounding was a chore for others. She lived to launch. And she was definitely good at that, working her way into varsity minutes after starting on the junior varsity level. By the end of her first campaign, she was a vital part of BNL’s drive to a regional title.

As she continues through her final season, McKnight is so much more. She’s got an edge of meanness, a fearlessness to play physical, a willingness to defend, a grit that shows on her face when she attacks the basket. She is now a basketball player in all phases, not just one.

“At first everybody thought I was just a shooter, that’s pretty much all I did,” McKnight said. “But I realized I could do more.”

That personal epiphany came after long conversations with her coach, and with her grandfather. And if there’s anyone outside the BNL locker room to listen to when it comes to the game, it’s Dan Bush, the Oolitic legend, the coach who guided Damon Bailey and the Stars to the 1990 state title.

“A big influence,” McKnight said. “I just see him as my Grandpa, I don’t see him as a legend or whatever. So there’s no pressure to live up to that. But I’ve liked basketball since I was little because of him.

“He tells me to be a good teammate, pass the ball. He was one of the people to tell me I could do more than shoot. I knew he knew what he was talking about, so I should probably listen.”

Teens can be stubborn, so the transformation was not overnight. As a sophomore, McKnight would frown a lot, showing her disdain for contact, and pout a little. Part of that was a fear factor from the ACL knee injury she suffered in the 2018 semistate. Part of that was the growing process.

Then at some point as a junior, McKnight started to shove back when pushed, to growl rather than groan, to snarl a little when she drove the lane toward the rim.

“After I did come back, I was a little more timid with my knee,” she explained. “Now I just go in there and don’t really care. I just told myself I was going to run in there and get the rebound. If they don’t block out, it’s easy on the offensive end. And if you just block your girl out, you go get the ball.”

BNL coach Jeff Allen witnessed the change from someone who backed away to a pilot-in-charge warrior. McKnight is now a leader, not a follower.

“Leadership has been something that has been a pleasure to watch,” Allen said. “Coming in as a freshman, just looking to shoot the basketball, focused more on herself, she has become a kid who is focused on the team.

“She’s not a real vocal leader, and we talk about that, but she leads with her actions on the floor. She leads by example, she will give you a great effort, whether it’s going after a loose ball or fighting for a rebound.

“She’s become a well-rounded player. We talked about not only being a scorer or shooter, but rebounding, being a good defender. And she has taken that to heart. She’s done a great job. She understands it’s more than just scoring.“

So there’s irony in the fact McKnight has etched her name among the immortals for scoring. She worked so hard to become more. And that’s the one part of the game that drives her crazy. She’s a shooter with no memory, like all the good ones who believe the next one is going in. But she is her own toughest critic when those beautiful, quick-release jumpers from the 3-point line don’t fall.

“It was literally like ‘Why can’t I make one?,’” she said, recalling her tough day in last year’s semistate. “Every game, when I’m not making them, it’s like why can I go 7-for-8 one game (she drilled 7 treys in back-to-back games against Columbus East and Floyd Central last year) and 2-for-something the next?

“I think I’ve gotten a better attitude over the years. If I miss a shot, I don’t get down on myself. If I don’t have a good shooting game, I do more than just shoot.”

“From a scoring standpoint, when her shot doesn’t go in, she’s hard on herself,” Allen said. “But she feels like she will make the next one. She can miss five, and she knows the next one is going in.

McKnight earned that respect. She has improved every year, from 9.0 points per game as a freshman to 14.9 now. Only Brittani Rizzi, who finished fourth on the state list for career 3-pointers, was more deadly from distance.

“It’s important for a freshman player, working them into a gradual rotation of varsity minutes, letting them have success,” Allen said. “Those are important steps to take. If you do it the right way, it builds into a player that has a lot of confidence going forward.”

Only one thing is missing from the resume of the Saint Francis recruit. She sees those banners hanging above the northeast corner of BNL Fieldhouse. That’s the real secret to basketball immortality. And this is her final shot.

“State championship,” McKnight said. “That’s really important. I want to do that for my senior year. It’s really gone fast. You think that school will go slow, but it really does go fast.”