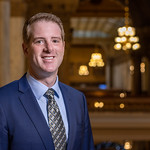 (INDIANAPOLIS) – Governor Eric Holcomb today announced that he has selected Matthew Brown to serve as the director of the Indiana State Personnel Department.

“Matthew is a dedicated public servant who understands the inner workings of the State Personnel Department through his variety of experiences within the agency,” Gov. Holcomb said. “Under his leadership, the department will enable, develop, and inspire state employees to continue delivering great government service to Hoosiers.”

Brown began his career at SPD in 2006 and served in multiple roles until 2012, including as director of dispute resolution. After a stint in private practice, he returned to the department in 2014 to serve as the interim director of talent acquisition and then later as employee relations counsel. From 2017-2019, he served as the deputy director of operations at SPD.

Brown will begin his new position on Monday. Former SPD Director Britni Saunders resigned from her position in November. Office of Administrative Law Proceedings Deputy Director and General Counsel Michelle Allen will serve as the interim director of OALP.