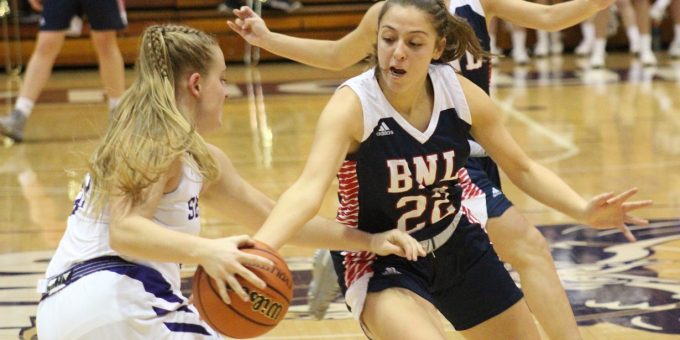 BEDFORD – Extraordinary times call for extraordinary measures, and 2020 certainly qualifies. That’s why, in case the worst should happen, Bedford North Lawrence will honor its best earlier than normal.

Normal? What’s that now? Rather than tempt Fate and wait until the traditional home finale in late January to celebrate the six seniors on the roster, the Stars will fast-forward the annual observance for the team elders to Thursday night.

The seventh-ranked Stars (7-1) will face Seymour (4-3) in an important Hoosier Hills Conference clash, but for a brief time that will be overshadowed as the senior class of Chloe McKnight, Irye Gomez, Jenna Louden, Haley Deckard, Makena Moore and Grace Kinser take their bows.

If success is measured by wins, this group definitely deserves the applause. They’ve been a integral part of a program that has gone 74-18, winning three sectionals and two regionals, during their tenure. If it’s determined by character, these Stars have earned the acclamation.

For example, with six seniors, BNL coach Jeff Allen obviously can’t start them all. He was approached multiple times by someone offering to sit so the others could shine under the spotlight.

“We’ve done a lot of great work the last 3 1/2 years, and these kids have been a big part of that,” Allen said. “You love to see how they develop and grow, how they turn into fine young ladies that will represent your community and school. Those six kids have done a great job, being great teammates, supporting the program. They’ve been a big influence and will be long remembered when they’re gone.

“Each is unique, but similar from the standpoint they are high-character kids. They care about each other, they care about what they represent in Lady Stars basketball.”

Each has a definite role. McKnight, Gomez and Louden are usual starters, Deckard and Moore have earned spots in the eight-player rotation, and Kinser is the ultimate role player, accepting her spot as a practice motivator while sacrificing for the greater good.

“I’m just proud of myself for sticking through all four years,” Kinser said. “I don’t play very much, but I do things people don’t see. I get upset at times, but I enjoy being with everyone.

“Like my dad says, when I get upset and don’t want to go to practice, or give up basketball, you have to think ahead. We’re good and have a chance to go to state. If we do, you can tell your kids ‘Hey, I was part of that team.’”

“Not a lot of people get to play at a high level of basketball,” Moore said. “It’s a good thing. Being a part of that is something not everyone gets to experience.”

They started together in elementary basketball, their mothers have the pictures posted on social media to prove it, and those years have swept past in a blur. Now they have proven themselves as toughened survivors, competing amidst the storm of a virus epidemic. Years from now, their grandchildren might not believe the stories.

”It’s more like we’re getting through this pandemic,” Louden said. “But at the same time, we’re celebrating each other. We’ve played together for so long.”

Now back to the task at hand. The Owls would love to spoil the celebration.

Seymour suffered a 57-39 loss to Jennings County on Tuesday, ending its four-game winning streak, but the Owls have weapons to insert in the BNL weakness slot of interior size. Senior forwards Grace Meyer (14.7) and Grace Schrader (8.1) will get special attention from the BNL defense.

Last season, during the regular-season battle at Seymour, Meyer and Schrader combined for 27 points and shot the Owls to the brink of an upset. Seymour, despite the self-destruction of 27 turnovers, despite BNL’s 25-point edge at the foul line, had the Stars in squirm mode for the first 24 minutes. But BNL opened the final period with 12 consecutive points and salvaged a 59-49 victory. McKnight had 25 points for the Stars.

In the rematch, BNL chased the Owls off the bonus line. Seymour was 1 of 18 from distance and suffered for it as the Stars cruised to a 59-26 win in the opening round of the sectional. Gomez and Madison Webb had 15 points each for BNL. Seymour failed to break double digits in any quarter, shot a miserable 23 percent and got outrebounded 40-23. That adds up to a runaway almost every time.

“They’re definitely a challenge for us with their size,” Allen said. “We’ll have to make sure we give really good help when they try to isolate us on the block or the high-post area.”

BNL is coming off a remarkable performance at Jeffersonville. The Stars improved to 3-0 atop the league with an 84-37 victory, highlighted by a team barrage of 18 3-pointers.

Last meeting: Last season, the Stars swept past the Owls with two wins. BNL won the regular-season clash 59-49, then crushed Seymour 59-26 in the opening round of the sectional at Jennings County.

Game notes: BNL has won six straight in the series.