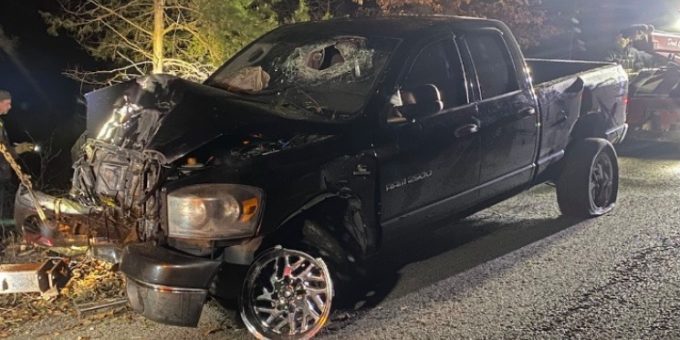 (WASHINGTON CO.) – On Saturday morning, at approximately 2:30 a.m., the Washington County Sheriffs Department received a call about a one vehicle crash with injuries.

The caller reported that the crash occurred on Daisy Line Road, near Blue River Church Road. Deputies and emergency services responded to the call.

Deputies arrived on the scene and found a Dodge pickup truck that had traveled off the roadway and collided head-on with a tree.

20-year-old Brian Cortez, of Pekin, was identified as the driver and the only one in the vehicle at the time of the crash. Cortez stated he swerved to miss a deer and ran off the roadway.

Cortez admitted to deputies that he had also been drinking alcohol.

Cortez was transported by the Washington County Ambulance Service to St. Vincent hospital, in Salem, where he was treated for minor injuries.

Cortez was taken into custody at the hospital and transported to the Washington County Detention Center, where he was booked in and charged with Illegal Consumption of Alcohol and Operating a Motor Vehicle While Intoxicated.

Deputy Allen Taylor is the investigating officer and he was assisted by Deputy Lucas Gray, the Washington County Ambulance Service and members of the Pierce/Polk Volunteer Fire Department.