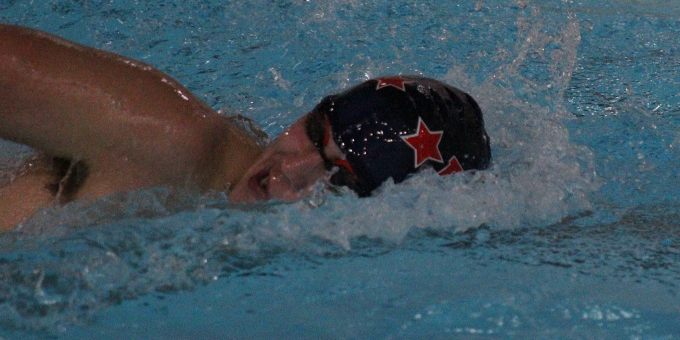 What he inhales is the competitive air. Swimming is all about races against the clock, against your former best and the challenger in the next lane over. Every time the Bedford North Lawrence junior hits the water, he takes a big gulp of that life-giving energy.

Allen was a double winner for the Stars in their home opener on Thursday night, splashing to the wall first in the 100- and 200-yard freestyle races. The Stars didn’t possess the team depth to go deep with Bloomington North as the Cougars won the boys meet 124-56.

The Cougars, with team members facing contact tracing protocols, did not bring their girls squad, although BNL used the time as practice runs in meet atmosphere.

Allen touched first in the 100 in 52.16 seconds, and he took the 200 in 1:56.84. Those are times not far off the seed times he took into last year’s sectional, quite remarkable considering the down time from a lack of summer workouts and events during the virus shutdown.

“I feel like I’m in a good position,” Allen said. “My times are closer to last year, and I’m coming over the top of the peak. I’m headed that way.

Allen was the lone winner, but other Stars had similar performances. Alexander Swenson was second in the 100 butterfly by the narrowest of margins. North’s Jack Steiner won that race in 56.97 seconds, just .01 ahead of Swenson.

“Never cut your fingernails the day of a meet,” BNL coach Adam Young joked. “Alexander didn’t get the wins but he’s really doing well. We can’t put into context how far ahead of the curve we are, given the circumstances. Some of the times are incredible. It’s super exciting.”

“As always, we had pretty nice performances up top from our No.1 guys and girls,” Young said. “We just don’t have the depth to compete right now. But I was impressed overall. We had a lot of PRs. We’re looking real good. We’re ahead of the curve.”

While BNL swimmers were forced to stage an impromptu intrasquad workout, the Stars used the meet to test relay teams and race for personal records. Sophomore star Emma Gabhart almost broke a school record while swimming alone in the 100 breaststroke as she finished in 1:10.40.

”They did phenomenal for just swimming against themselves,” Young said. “They get to see they’re getting faster.”

BNL is scheduled to return to action at Martinsville on Tuesday.