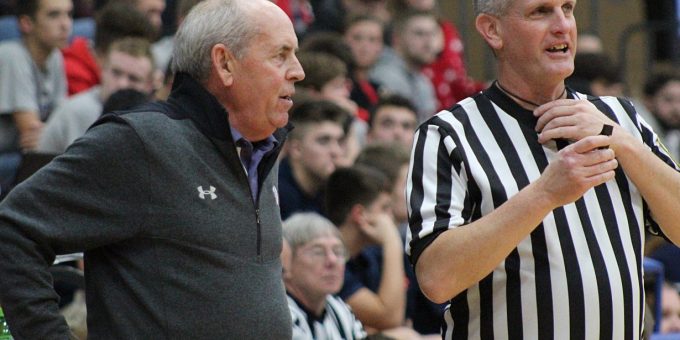 BEDFORD – Sympathy for Bloomington South’s J.R. Holmes, the winningest basketball coach in state history and a tormentor of Bedford North Lawrence with 16 straight victories in what was once a heated series, is a tough sell in these parts.

But consider the evidence for that argument: 2020 has been a tough year for everyone, especially for the Needmore graduate with 837 career victories.

Last March, South was undefeated at 26-0, ranked No.1 in the final poll, fresh off a sectional championship and poised to chase Holmes’ third state title in his 50th season. That could have been a career capper. Then the coronavirus exploded, wiping out the conclusion of the IHSAA state tournament. Disappointment was an enormous understatement.

Earlier this summer, talented South senior Connor Hickman, a Bradley recruit, injured his right shoulder and required surgery in October. Projected to be South’s leading scorer and an Indiana All-Star contender, he will miss the entire 2020-21 campaign.

That’s quite the double whammy of bad luck. But before shedding a tear or sending condolence cards, remember Holmes didn’t break Jack Butcher’s record by accident. He knows a few tricks, and the Panthers (1-1) still have talent as they prepare to face the Stars (0-1) on Friday night.

Hickman’s unexpected absence forced South to scramble into new roles. The Panthers struggled offensively in the opener, falling at New Albany 61-36 after a dismal fourth quarter. They bounced back to conquer Milan 55-35 on Tuesday.

BNL is in similar position. Brayton Bailey’s expected graduation forced the Stars to shift into new roles. They suffered through the opener, dropping a 38-27 decision to Bloomington North. The Stars hope to bounce back and end South’s dominance.

“It’s hard to get upset with kids when they’re trying and the ball doesn’t go in the basket (BNL shot 26 percent against North). Despite the loss, and it’s only one game, hopefully we learned a lot and can carry those lessons into this weekend.”

South has found its main option in senior Joey Bomba, who has scored 32 points in the two games. Senior guard Jalen Peck added 11 against Milan, and senior Maddix Blackwell totaled 9 in that win.

“After New Albany, I told Bomba ‘Welcome to what you’re going to see every game,’” Holmes said. “Everyone will be grabbing, getting really physical with him. He will see trick defenses, they’ll double-team him. So we have to have someone step up into that 8-12 points range.

“They would have no one to guard Hickman. He would be a 20-something scorer. Losing him makes us about even, we’re trying to find people to fill scoring positions.”

“Bomba is tough to guard,” Hein said. “He goes inside, he’s strong, and he can step out. If you put a big on him, he takes it outside, If you go smaller he takes it down on the block.”

BNL hasn’t discovered that primary weapon yet. Jackson Miracle had 9 points and Ben Cosner 8 against the Cougars, while the backcourt of Kooper Staley and Colten Leach – predicted to shoulder a lot of the offensive load – were a combined 2-for-20. The Stars played well on the defensive end and battled North even on the boards, but the lack of production (and 20 turnovers in 58 possessions) was a problem.

“On the rebounding end, we played really well,” Hein said. “We struggled to score. A lot of it was our inability to finish at the rim, and Kooper struggled. That was a lot of their game plan, and we have to expect that. We have to get other guys to score points for us.

“We’re learning how to power through. Basketball is not a non-contact sport, it hasn’t been for a long time. We have to figure that out. They’ll pressure us like North did, there’s no question about that. Everyone on our schedule will do that after watching the North game. We have to handle it.”

Could BNL scuffle any worse than the last battle with South? Hopefully not. The Stars went 13 minutes without a field goal, hit only one shot in the first half, and got dismantled 62-30. Anthony Leal, now with Indiana University, scored 25 points and Noah Jager added 16 as South blasted BNL to oblivion, the worst defeat to its nemesis since the Panthers clawed the Stars 79-45 during the 2005-06 season.

That South team was loaded. This one has work to do.

“We’re scrambling all over the place, trying to figure out how to get a point here, a point there,” Holmes said. “Brayton was their main scorer and also the guy that got other people easy baskets. That’s the way Connor would have been.

“We didn’t play bad at New Albany, they hit three straight threes to start the fourth and we went 1-for-11. We were with them until the fourth quarter. I was not totally devastated. I was disappointed we got beat, but we really competed the first three quarters. We didn’t shoot well.

“BNL had the same problem we had. They couldn’t score in the fourth quarter with the game on the line. They got beat because they turned the ball over and couldn’t hit layups.”

Last meeting: Last year at BNL, Indiana University recruit Anthony Leal scored 25 points as South stormed to a 62-30 win. BNL had only one field goal in the first half. Brayton Bailey had 15 points for the Stars.

Game notes: South coach J.R. Holmes, a Lawrence County native, owns the state record for career coaching victories with 837. Holmes graduated from Needmore in 1965. BNL’s last win in the series was a 64-62 victory during the 2003-04 season.