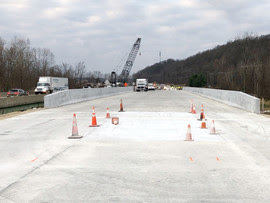 (MARTINSVILLE) – Motorists need to stay alert and watch for changing traffic patterns in downtown Martinsville. To stay ahead of today’s rain and snow in the forecast, I-69 Finish Line crews worked over the weekend to complete their restriping of Morgan and Jefferson streets.

Click here to see a map of the area.

The new traffic pattern allows the stop signs at the intersection of Morgan and Jefferson to be removed.

Here’s are the major changes drivers will see:Restriping and change in direction on Jefferson Street.No stop signs at the Morgan Street and Jefferson Street intersection.

The restriping and improvements will help to safely more move traffic during next year’s temporary closure State Road 37 in Martinsville.

Watch for another new bridge to open soon. The bridge that will carry traffic over State Road 37 at Egbert Road is expected to open to traffic by late December. It’s the fourth new bridge to open this year. The Grand Valley Boulevard overpass, which opened in June, was the first new I-69 Finish Line bridge to open. The Perry Road and Waverly Road bridges both opened this month.

Drivers should watch for a significant traffic shift that happened last week. Drivers on S.R. 39 have shifted to the new S.R. 37 southbound pavement and the new Indian Creek bridge as they enter S.R. 37 southbound. S.R. 39 traffic is reduced to one lane before it merges into S.R. 37.

Finishing touches are wrapping up on S.R. 39/Morton Avenue between S.R. 37 and S.R. 67. Watch for intermittent lane closures the next week or so as crews complete their work in the area.

S.R. 37 will be closed in Martinsville starting in early 2021 and continuing for most of the year. The nearly 5-mile closure extends from S.R. 39 to Morgan Street and will allow crews to work faster and safer, saving a full year of construction. Visit I69FinishLine.com/closure to find answers to your closure questions.

New traffic signals are coming soon to S.R. 39 and Morton Avenue. A permanent signal is planned at Burton Lane/Hacker Drive and a temporary one at Rogers Road near S.R. 37. This will help local traffic enter and exit the four-lane Morton Avenue when S.R. 39 serves as the detour for S.R. 37.

Have questions or comments? Call 855-INDOT-4U or email INDOT@indot.in.gov to connect with our team. Find the latest news, information and traffic updates at I-69FinishLine.com, Facebook, Twitter and Instagram.