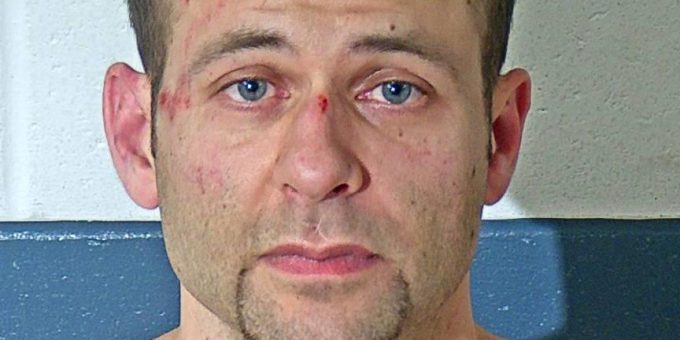 (MITCHELL) – A Mitchell man was arrested Friday morning after Mitchell Police officers were called to the 1200 block of West Brook Street after a report of an unwanted man at the home.

Police responded to the home at 5:51 a.m. after the caller said Spilmon was attempting to try to force his way into the home.

A Mitchell Police officer responded to the scene first and found Spilmon at the back of the home looking for a way in. Spilmon then took off on foot and the officer followed in pursuit.

Spilmon appeared to be upset and was incoherent. He was asked to stand up with the assistance of officers but he refused to do so. Police say Spilmon’s speech was drawn out as if he was going in and out of sleep and he was difficult to understand. He was told to calm down or he would be charged with disorderly conduct. Officers then assisted Spilmon to his feet.

Spilmon then looked at one of the officers and said “lets fight.” He then asked the officer to take off his handcuffs so he could fight them. Officers then attempted to escort Spilmon to a police vehicle. He again yelled at and fought with officers. He was assisted back to the ground where he began kicking his legs and refused to stop. He was then restrained until he calmed down.

Spilmon was then placed in a police vehicle. While an officer was placing a seatbelt on Spilmon he again told the officer to take off his handcuffs so he could fight them. He continued to be uncooperative and continuously hit his head on the partition between the back and front seat.

Spilmon was then asked if he needed medical attention. He refused to give police his name and continued to yell and curse at the officers and kept hitting his head off the protective plastic. Police said his behavior continued to cycle between calm and erratic.

While transporting Spilmon to jail, he continued his erratic behavior. An officer reported that Spilmon would look out the window, smack his head off of the window, and yell that he was being hit and was dying.

Spilmon also said, “I will rip your face off and drink your blood.” He then began smashing his head into the protective glass and window. The officer looked back and found Spilmon attempting to get out of the seatbelt. He was ordered to stop and sit back in his seat but he would not comply. Fearing that Spilmon would cause more harm to himself if he was not properly seated for the rest of the transport, the officer activated his emergency lights and pulled the police vehicle to the side of the road on State Road 37.

Spilmon was kicking his legs and thrusting his head into the protective plastic in front of him. The officer opened the back passenger door and ordered him to stop. He would not comply and began cursing at the officer and continued to throw his body around. Once again the officer properly positioned Spilmon back in his seat and continued on to the jail.

Spilmon continued to fight with jail and police personnel. It took four jail offices to transport Spilmon into the jail.