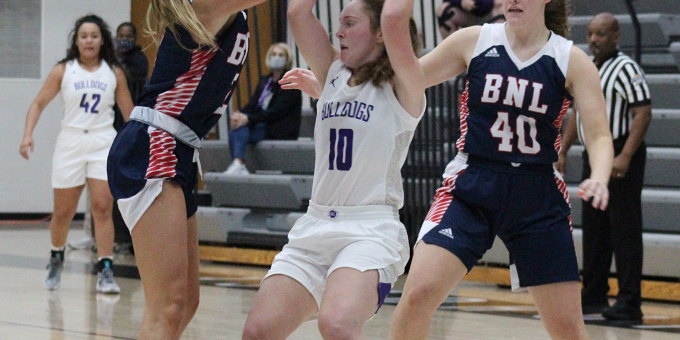 BEDFORD – Bedford North Lawrence is The Empire of the Hoosier Hills Conference, having won or shared 21 league championships. The Stars claimed 12 straight from 1984-95, and they’ve won seven of the last nine with three consecutive crowns.

Figure in the nine straight sectional titles (against five other league teams), and it’s no wonder BNL is feared and respected while being hated and targeted at the same time. Some rebel band is always scheming to blow up the Death Star.

That coveted championship is always on top of the goal list for the Stars. They will start the quest for another on Tuesday night, opening conference competition against Jennings County.

If anybody had the plans to destroy this edition, Brownsburg revealed them on Saturday night. Everybody will look to copy the program the Bulldogs used to conquer the Stars: slow down, zone, hope BNL shoots like stormtroopers, and hit the small target with a last-second blast from long range.

BNL (4-1) absorbed a gut-punch loss at Brownsburg as Miya Webb swished a deep 3-pointer just ahead of the buzzer for a 43-42 victory. That setback will cost BNL poll points and its aura of invincibility, but the greater concern is the confidence blow. The Stars have little time to recover or pout.

“We have four conference games (over a 10-day span) coming up,” BNL coach Jeff Allen said. “It’s a real heartbreaker to lose on the road. But in the big scheme of things, it doesn’t mean a heck of a lot.“

Here’s what it does mean: BNL will now have to prove itself anew. The shooting stats through the first five games (37 percent overall, 31 percent from long range) have yet to match the firepower the Stars displayed in the preseason. Take away the 11 treys during the win over North Central, and the percentage is alarming.

“We were frustrated,” Allen said after the Brownsburg performance. “We had not seen a match-up zone, had not worked on it. We’ll be better for it.

“Some of our conference teams have tried to play us in a match-up zone. We’ll go back and watch film, get better at it. It made us take some shots where we could have gotten something better. But the pace of the game never favored us. We like to play faster than that. Sometimes you have tough nights like that.”

The Panthers (2-0 with a home game against Scottsburg on Monday) have the weaponry to do considerable damage. Senior guard Addyson Kent is averaging 20 points per game, and freshman Juliann Woodard is contributing 12.5.

Jennings had four double-figure scorers in its opening win over Shelbyville (73-61), and Kent had 26 during a 58-44 victory over Rushville. BNL is all too familiar with Kent, who bombed in eight treys and scored 27 points against BNL in the regular-season meeting last season.

The Stars won that one as Madison Webb had 17 points and 11 rebounds. BNL crushed the Panthers 64-32 in the sectional final rematch. Webb added 18 points and Kent was only 1-of-10 from distance. BNL no longer has its inside force. Jennings still has its perimeter power and four returning starters.

BNL will have to find some inside scoring punch to complement its arc sabers. Chloe Spreen leads the Stars at 15.6, Chloe McKnight is adding 14.4, and Irye Gomez is totaling 10.8.

Last meeting: The Stars swept the Panthers last season, winning 53-43 during the regular-season meeting at Jennings and 64-32 in the sectional final at Jennings.

Game notes: BNL has won 19 straight in the series with Jennings County.