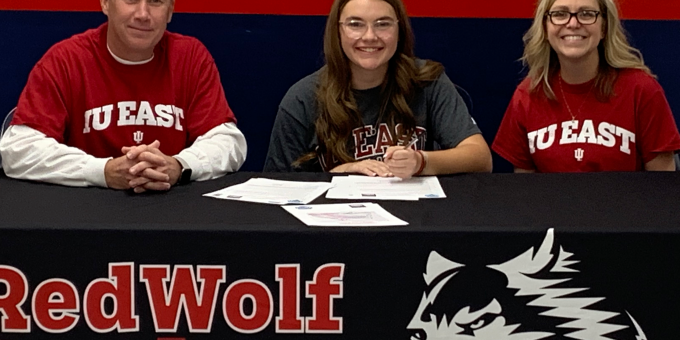 BEDFORD – Nothing bothers Olivia Sanders. Or if it ever does, she’s an expert at hiding it. That’s a perfect attitude and mindset for the game, which can drive many to unprecedented levels of frustration.

Sanders, the carefree kid with a quick laugh, will take her game to the next level, where the pressure to perform is constant. What, her worry? Not a chance.

Sanders grew up around the game, with her father Aaron as her high school coach and constant mentor. Even with that advantage, she still had to develop her own passion for golf. Signing to play for the NAIA program was the realization of a goal.

“Being able to play at the next level is a lot different than high school,” she said. “The pressure is higher, I obviously know that. But watching other people get to this level, it’s something I never thought was definitely happening. Then it happened.”

IU East coach Billy Mullin, a former prep coach at Hagerstown now in his third season with the Red Wolves, started following Sanders’ exploits in 2019. The more he watched, either in person or on video, the more he liked what he saw.

“I knew we had a good kid, from a good golf program,” Mullin said. “It adds another layer to what we’re building. Our time is coming, and she will be a part of our time.

“I was really excited by her short game. Her athleticism will translate well to the next level. College golf requires a little more athleticism, and she has that piece. And her experience. She’s been playing golf a long time.”

Sanders is the seventh player to climb to the next level in her father’s 11 seasons as the BNL coach. This one meant a little more.

“It’s always good to turn out players, and when it’s one that lives with you, it’s even better,” Aaron said. “She’s had her eye on it for a long time. Her freshman year, she got to compete with some really competitive players, with a good group. She got a good feel of what competition is about and got pushed a little bit. She knew if she didn’t compete, she would get left behind. That gave her some confidence that she could do it.”

“Having your No.1 supporter there, always, even at home, was special,” Olivia said. “Talking about golf. On the course, it means a lot, having that bond.”

Sanders’ strength has been her short game, and anyone who has grown up on the small greens of Otis Park needs that to score. She will hone her long game (driving and iron shots) to adapt to the longer college courses.

IU East enjoyed the best season in program history in 2018-19, winning the River Falls Conference Fall Preview and finishing second in the league tournament. Last season, like so many others, got stopped by the current virus epidemic.

Sanders, who fell in love with the campus and program during her visit, should be a perfect fit.

“She has a pretty good attitude,” Aaron said. “I‘ve seen her get upset, like all of them have, but 99 percent of the time she is able to shake things off pretty quick. You have to do that.”