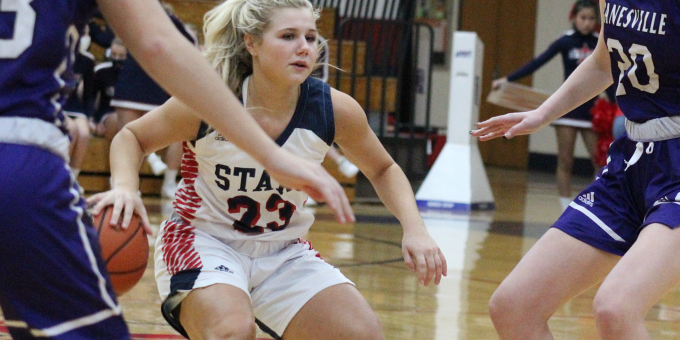 BEDFORD – Mooresville, by unfortunate circumstance and schedule crowding, has become one of the poster programs for the headaches and problems in this virus-plagued season.

Originally set to visit Bedford North Lawrence on Nov. 6, the Pioneers were forced to move the game to Wednesday because of multiple players in quarantine. They finally opened against No.8 Fishers (which had already played five games) last week and suffered a 71-53 loss.

Now they must go on the road for back-to-back midweek battles, concluding with the trip to BNL Fieldhouse to face the hyper-drive Stars, who are flying through basketball space at warp speed following their impressive victory over state power North Central.

Don’t expect sympathy from BNL, newly minted at No.3 in the latest Class 4A rankings. The Stars certainly have the utmost respect for Mooresville coach Mark Hurt and his program, but they haven’t forgotten last year’s loss to the Pioneers. BNL will not down shift from maximum-effort overdrive.

The force of momentum is with the Stars. They were sensational during the 65-57 triumph over North Central, counting on experience and new levels of toughness for their first signature win of the season. They outrebounded a much bigger opponent, they were clutch from the foul line in the late stages, and they won while losing freshman star Chloe Spreen – the team scoring leader the first two games – to fouls with 4:32 left.

“Our effort out on the court has been outstanding,” Allen said. “So from that standpoint, I don’t think there will be a letdown in preparation or from this bunch. When you have that type of effort, it sure makes up for a lot of shortcomings.

“It’s a really good sign for our team, because you’re going to run into situations where you have adversity. Chloe had a really tough defensive assignment. She’s a 5-9 guard and I asked her to guard a 6-3 Division I post player (Meg Newman). That’s putting her in a tough situation as a freshman. From a team standpoint, to play that level of opponent and come out with a win with her not at her best, it’s a great sign.”

Spreen is averaging 15.3 points, part of BNL’s dynamic balance with Chloe McKnight (14.7), Irye Gomez (13.7) and Karsyn Norman (11.7) also reaching double figures. Jenna Louden has been solid as the floor general (10 assists, only 1 turnover at the point) and added 8 rebounds against the Panthers.

Scoring will not be the focal point against the Pioneers. This already sounds like a broken record that skips backward, but BNL will again be cognizant of the rebounding stats as the first priority. And there’s a reason for that. That was the difference in Mooresville’s 55-50 win last year.

Maddie Denny scored 19 points, sparking Mooresville’s late comeback to spoil BNL’s 2019-20 season debut. Paige Gregory added 16 points, but those weren’t numbers that did the most damage. The 16 offensive rebounds, including those that led to second-chance points in the fourth quarter, were the problem.

BNL owned a 43-36 lead with 6:50 left, then went the next 5:50 without a field goal. Mooresville scored twice on third-shot possessions while pulling away. The physical Pioneers posting an amazing 26-11 rebounding advantage in the second half.

Mooresville had two guards (Denny and Abby Young) with 10 rebounds each, while reserve guard Ally Graber grabbed 8. That trio combined was one shy of matching BNL’s team total.

“They play tough,” Allen said. “The issue we had last year with them was rebounding, and it’s an issue this year. That will be a focus. That cost us the game last year because we didn’t rebound, we got out-toughed a little bit. We have to take care of the defensive boards.”

Denny and Young are back. Denny scored 13 points in the Mooresville opener against Fishers, while Young and Ally Graber totaled 8 each.

“We expect the typical Bedford team – well coached, disciplined, and a proud program that plays hard,” Hurt said. “We play a tough schedule each year and Bedford North Lawrence will be a good test to see where we are as a program.

“This season has been difficult with the postponements and schedule changes. The players have done an outstanding job adjusting and are looking forward to playing basketball.”

Both teams base their foundation of success on the disciplined, tough-minded approach.

“Mark, in my opinion, is one of the top coaches in the state,” Allen said. “His program, and the way they play, is very similar to us. They’re very disciplined, they have a lot of pride in what they do.

“I’d like to think we’re more seasoned this year. These kids have grown. The seniors have been outstanding. My bench people, we don’t lose anything with Makena (Moore), Haley (Deckard) and Carlee (Kern). They’ve been outstanding.”

Last meeting: Last year at Mooresville, the Pioneers rallied from a 7-point deficit in the fourth quarter for a 55-50 win. Maddie Denny had 19 points and 10 rebounds while Paige Gregory added 16 points for Mooresville. Madison Webb had 16 points for the Stars.