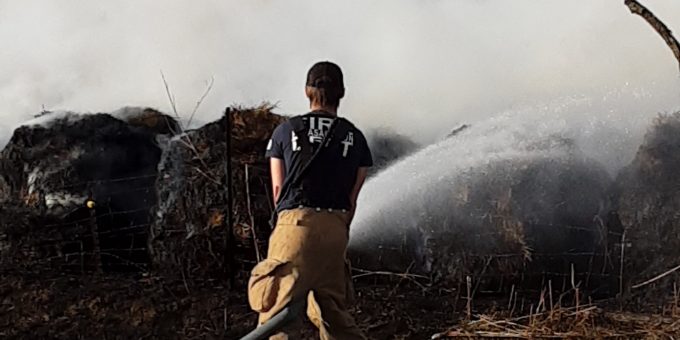 (HELTONVILLE) – An electric fence is suspected of sparking a hay bale fire which spread to a corn field near Zelma on Thursday afternoon.

Approximately 50-60 bales and a cornfield caught on fire. Two brush rigs and four tankers were used to extinguish the blaze.

This fire is one of several fires throughout southern Indiana, with winds gusting up to over 50 miles per hour. Firefighters from Pleasant Run Township did not leave the scene until about 10:30 p.m.

Lawrence County firefighters were busy throughout the day with wildland fires. The first was reported at 9:30 a.m. with Huron and Marion Township Volunteer Fire Departments dispatched to the 1700 block of Huron Williams Road. The fire was caused by a downed power line.

Shawswick firefighters responded to 482 Fort Ritner Road for a wildland fire at 5:40 p.m. According to Capt. Austin Brown, the fire was a small fire on the edge of the woods and was put out prior to the fire department’s arrival.

Marion, Mitchell, and Hoosier Forestry firefighters extinguished a large field fire on Parks Implements Road. The fire spread quickly due to windy conditions. The wind made fighting all of Thursday’s fires difficult.

The fire started in a debris pile behind a barn that spread to a corn field that had been harvested the day before. The fire was under control by 7:30 p.m. according to Paul Gillespie, Fire Chief of the Marion Township Volunteer Fire Department.

The National Weather Service issued a Red Flag Warning from 11:00 a.m. to 7:00 p.m. Thursday which means that conditions would be dangerous for fire crews.