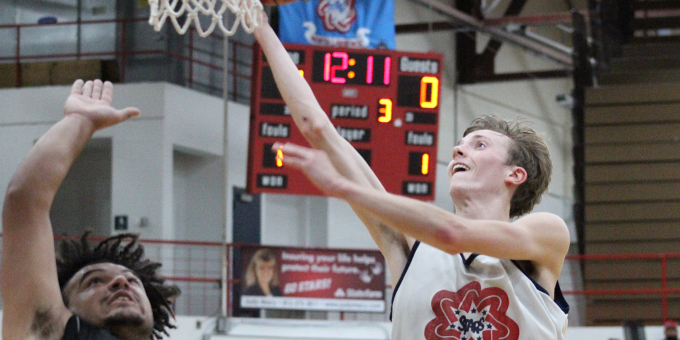 Rock Creek – and this could be a recurring theme until the virus surge subsides – was missing most of its key personnel, although the Stars still cracked the whip without mercy. They should, regardless of the foe’s status. The IHSAA controlled scrimmage was the last public action before the season opener, and BNL had kinks to straighten.

After a sluggish start, BNL easily won all four quarters and finished with an 85-41 triumph. Kooper Staley scored 25 points, the top cat among four starters in double figures. The Stars snarled their loudest in the middle quarters, winning those by a combined count of 45-13.

Rock Creek was due some sympathy. The Lions were missing leading scorers Ladarius Wallace and Lettwan Darden, plus 6-11 project Marial Diper. They would have looked a lot different and played different with that trio. They were left home in quarantine, and only seven made the trip from Sellersburg to BNL Fieldhouse.

BNL couldn’t worry about that. The Stars were glad to see unfamiliar faces as they finished preparations for the clash with Bloomington North.

“We got to see somebody else,” BNL coach Jeff Hein said. “It‘s hard to say how good of an opponent we saw because they had kids out. I’m sure when they play they’ll be a completely different team.

“But it was good for us to get out on the floor, playing against somebody that doesn’t know our stuff. We corrected mistakes we don’t always see in practice. Hopefully we can learn from it and move on.”

What was learned? Not much BNL didn’t already know. Staley can shoot. Colten Leach has an offensive game to go with his defensive toughness and court savvy. Ben Cosner is a capable scorer.

“I think I learned we’re balanced,” Hein said. “I like that.”

Rock Creek did make early noise in the first quarter, catching BNL in cat-nap mode with an 11-6 start. But once the Stars figured out what they were facing, they went to work as Staley drained two treys to start a 12-0 run. Leach had two buckets to cap the burst and Jackson Miracle scored from close range to complete the 20-14 advantage during the opening 15 minutes (played with a running clock).

“They made some shots early,” Hein said. “Those were deep threes. I don’t know that our defense was that terrible. We didn’t know anything about them, didn’t know who they were going to bring, who they had.

“As the game went on, we adjusted pretty well, figuring the personnel out. In a normal game you’d watch film and have a scouting report.”

Here’s a scouting tip: Don’t zone Staley. Both teams played zone in the second stanza, and Staley had four bombs during BNL’s 27-10 blast. In the third, Aden Pemberton scored three times as the Stars scored the first 16 points before Rock Creek’s Isaiah Ball ended the run with a 3-pointer with 44 seconds left.

Cosner made his biggest contributions in the final frame, totaling 10 points with a pair of treys.

“We’re staring to find our groove and trusting in each other more,” Staley said. “We’re believing in each other. We have to keep attacking and play like we’re playing right now. We’ll have a good future.”

Johnathan Boggs paced the Lions with 18 points and Michael Sulzer had 14. Rock Creek will just have to count the days – 14 is the magic quarantine number – until it returns to full strength.

“The way I played it up was, in this day and age where we’re playing and living, you don’t know what’s going to happen,” Rock Creek coach Chris Brown said. “That why we wanted to keep this scrimmage, because you don’t know what will happen from one day to the next.

“This was a chance to step into someone’s shoes that wasn’t here. Injuries happen, other things happen, sickness and foul outs. You never know when your name will be called. It would have been a different outcome if we had gotten to see everyone we have. But it is what it is.”

The Stars will host Bloomington North on Tuesday.