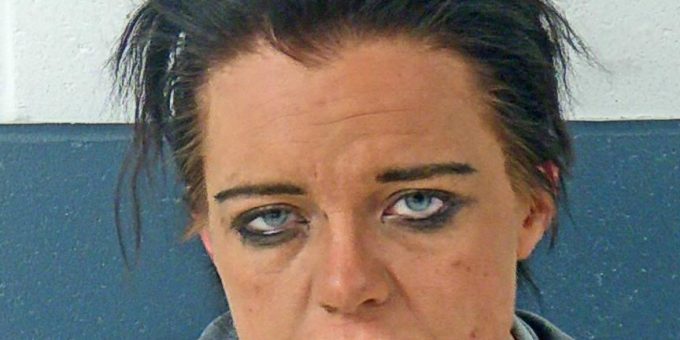 (BEDFORD) – An Orleans woman was arrested Wednesday afternoon after a Bedford Police Officer stopped her vehicle for a traffic violation at Mitchell Road and 30th Street.

Police arrested 35-year-old Melissa Phillips on charges of possession of meth, resisting arrest by force, trafficking with an inmate, driving while driver’s license suspended with a prior conviction, and was issued a citation for failure to use turn signal when changing lanes.

The driver then failed to signal as driver proceeded to turn right onto Mitchell Road.

The officer stopped the vehicle at the intersection of 30th Street and Mitchell Road and spoke to the driver, Melissa Phillips, and her male passenger, Bradley Carter.

Neither Phillips nor Carter could provide any form of identification. The officer said Phillips’s hands were shaking and she continued to reach around the vehicle after he advised her to stop.

The officer then asked Phillips consent to search the vehicle.

Phillips told the officer the vehicle was not hers and he couldn’t search it without a warrant.

K-9 Maximus arrived on the scene and did a free-air sniff around the vehicle and alerted officers to possible drugs in the vehicle.

Both Carter and Phillips were asked to step out of the vehicle.

Carter told police he had a shotgun in between his legs inside a duffel bag.

Phillips was then asked to step out of the vehicle. Officers said she tucked both her hands behind her into her pants. An officer had to physically grab both of her hands and tell her to stop reaching.

She then threw a bag of crystal meth onto the driver’s seat.

Phillips was arrested. While walking to a patrol car, she continued to pull away and had to forcibly be placed in the back of the vehicle.

During a search of the vehicle police did not find anything.

Officers then learned Phillips had a suspended driver’s license.

Carter was released from the scene.

After being transported to the jail, a jail officer witnessed Phillips grab a plastic bag from the front of her waistband and threw it into a cell.

A jail officer retrieved the bag which contained crystal meth.