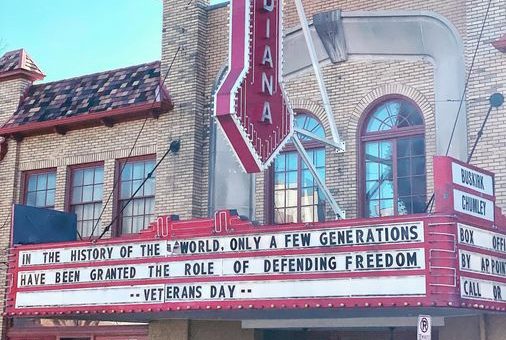 Bloomington Police officers were notified about the damage around 10 a.m. Wednesday.

According to Bloomington Police Department Capt. Ryan Pedigo, the manager of the theater reported someone had thrown a bottle through the marquis. Officials are unsure when the vandalism occurred.

Anyone with information about the vandalism is asked to call the Bloomington Police Department.

In 1922, the theater was built by Harry P. Vonderschmitt, who was tapping into a national trend. Stemming from an effort to attract middle-class viewers and enhance the on-screen world of fantasy, movie theaters of the 1920s emphasized luxury.

By the late 1920s, Americans were buying 95 million movie tickets each week, and theaters with seating capacities of 5,000 were not uncommon. Rich or poor, young or old, for the price of admission anyone could dream of a better life – more opulent, more romantic, more adventurous – at the movies.

The Storm, starring House Peters and Virginia Valli, was the first movie to play at the theater when it opened its doors on Monday, December 11, 1922. A crowd of 1,300 people – nearly 10 percent of Bloomington’s population at the time – turned out on that cold night to celebrate the theater’s opening.