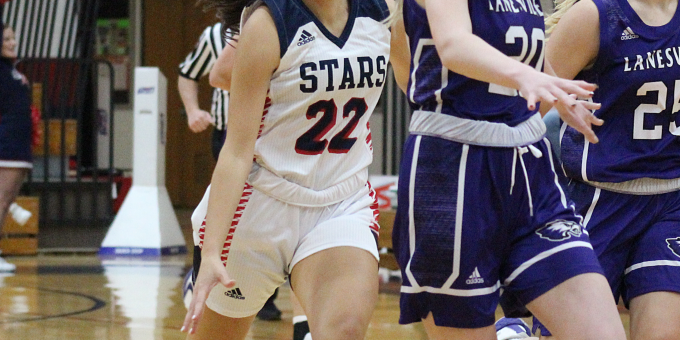 BEDFORD – After a 10-day break from competition following the successful season opener, Bedford North Lawrence will return to action with one of its toughest road tests of the season.

No.4 BNL, off to a solid start after the 63-38 triumph over Lanesville on Nov. 7, will visit Bloomington South (2-1) on Tuesday night. If there’s an opponent that has made life miserable for the Stars, even though BNL owns 9 consecutive wins in the series, it’s the clawing, defensive-minded Panthers.

South’s discipline and grit has been a trademark under veteran coach Larry Winters (304 wins in 22 years). The Panthers have pushed BNL to the limit on several occasions, especially during last year’s clash at BNL Fieldhouse. The Stars had to rally with furious desperation to pull out a 43-35 triumph.

More of the same is expected.

“I expect some great defense from Larry’s team like always,” BNL coach Jeff Allen said. “So it will come down to making shots and getting stops. If we can do that, we can keep the momentum the way we want it.”

BNL’s new-age approach this season will be one of tempo, of fast pace and aggression. The Stars fired 70 shots in the opener, forced 25 turnovers and hurried Lanesville out of its comfort zone. South will favor a more structured, less frantic style.

“It’s all about making shots,” Allen said. “If we make shots, we’ll be able to stay in our tempo, If we don’t, it will be a grind.”

South started with a 63-50 victory over Pike and a 40-38 triumph over Edgewood. The Panthers tumbled against Columbus East, suffering a 58-45 loss to Columbus East on Thursday. Brooke Grinstead has been the catalyst, averaging 18.7 after totaling 24 (with 7 3-pointers) against the Olympians.

“Grinstead brings athleticism, and want, to the court,” Winters said. “She wants to do whatever she can for our team.”

BNL will counter with the four-pronged four attack of freshman Chloe Spreen (20 points in her debut), senior Chloe McKnight (16 points), senior Irye Gomez (10 points and the leading antagonist of BNL’s press against Lanesville) and point guard Karsyn Norman, one of the heroes of last year’s win over the Panthers.

Norman had 13 points and BNL rallied from a 10-point deficit in the second half, forcing 10 turnovers in the fourth quarter during its comeback from the brink.

BNL has benefited from the layoff. The Stars will be back to full strength as seniors Makena Moore and Grace Kinser have returned from precautionary quarantine.

“We’ve cleaned some stuff up over the last week,” Allen said. “Practices have been good. This group practices really well and plays extremely hard. We’ll make mistakes and miss shots, but if we play with that type of effort, that will overcome a lot.”

South’s strategy will be slowing down the Stars to a manageable speed.

“They are very quick and well coached to start with, and they play with a love for the game,” Winters said. “We don‘t really make adjustments in tempo. We have a way we play and that’s what we try to do.”

BNL’s ticket allotment has been limited to 50. They will be distributed among players and coaches.

Last meeting: Last year at BNL, the Stars rallied from a 10-point deficit in the second half to top the Panthers 43-35. Karsyn Norman scored 13 points and BNL forced 10 turnovers in the fourth quarter during the comeback. Anya Friend had 7 points for South.

Game notes: BNL has won 9 straight games in the series.