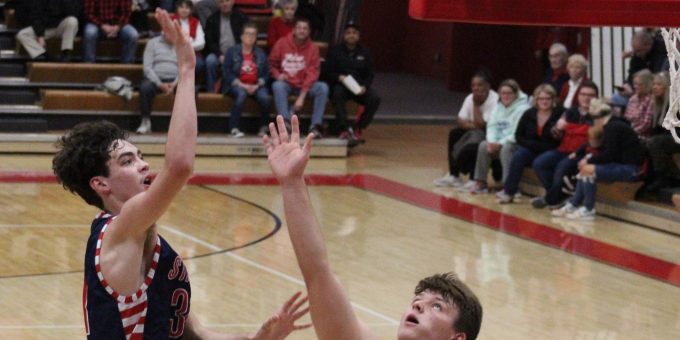 BEDFORD – Intrasquad scrimmages are like trying on new clothes in the department store dressing room. They fit great and look good in the mirror – until worn out in the real world. Then some alterations might be needed.

Bedford North Lawrence will gaze into the looking glass on Monday night as it stages the annual public debut. Evaluating the future during these glorified practice sessions is difficult, because everyone knows the script and the personnel. There’s a comfort zone of familiarity.

That’s especially true for the Stars, with four starters and six seniors returning, with the roles and rotations already taking shape after the first week of official practice sessions. They already know the measurements.

But wait, there’s a hole to mend. A significant one. So this scrimmage, and the IHSAA sanctioned workout against Rock Creek on Thursday, has significance as BNL prepares for the season opener with Bloomington North.

With the gradation departure of star Brayton Bailey, the leader in all phases (20.4 points, 7.8 rebounds, 5.6 assists), BNL has to stitch together offensive weapons. This scrimmage will provide a glimpse of how the Stars will accomplish that.

“I’m looking forward to it,” senior center Jackson Miracle said. “It‘s a new year. We don’t have Brayton any more. He was our main guy. So I’m excited to see what we all can do.

“We’ll have at least four averaging in double digits through the year. We’ll move the ball a lot more than we did and get the open guy the shot.”

Miracle is one those who should step forward to contribute more and help close the gap. Kooper Staley averaged 8.8 points, Ben Cosner totaled 6.3, Miracle added 6.1, and Colten Leach was a solid freshman who showed flashes of scoring potential. They all benefitted from Bailey’s presence, but if they all bump that production, they’ll be able to fill the void.

“It has to be by committee,” BNL coach Jeff Hein said. “I don’t think there will be one kid as the leader like Brayton was. Among those kids, we should be able to lead by committee.”

Other contributors will be seniors Aden Pemberton (back after missing all of last season with a knee injury), Josh Blunk and Austin Messmore, while underclassmen Colton Staggs, Kaedyn Bennett and Dylan Nikirk will compete for playing time. But nothing is set in stone.

“We pretty much have an idea of what our rotations will be,” Hein said. “We figured that out the first four days. There will be opportunities for people to step up and get more time if they play well. We’ll see how it works. After two games last year we had to change it all up. We’ll go with this until it’s broken, then we’ll try to fix.

“Practices have gone really well. They’ve done a good job. The things I’ve seen progress is conditioning and getting our form back.”

The scrimmage will allow for some tinkering. It will also show who’s prepared to assume more responsibility.

“We have to shoot the ball with confidence,” Miracle said. “Don’t be so scared to take the shot. Just take it, knowing we can hit it.”

“Having the experience back that we have, I don’t see that being a factor at the varsity level,” Hein said. “They’ve been there and done that. Hopefully we’ll execute. We’ve worked heavily on conditioning and fundamentals, our base stuff. But we have to be able to execute when we go out and play against somebody else.”

The scrimmage will begin at 6:30 p.m. Admission will be donations of Gatorade, water or laundry detergent. Hein will also conduct a parents meeting following the workout.