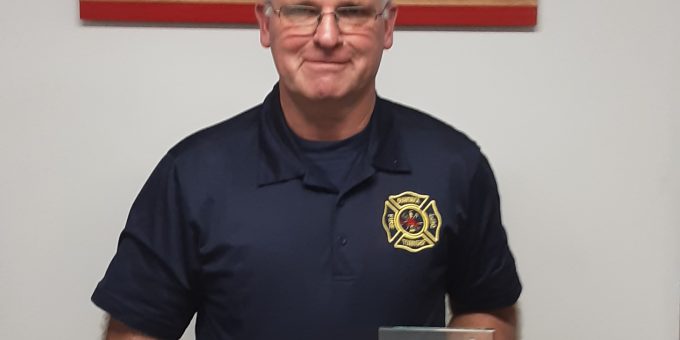 Larry K. Brown has been a volunteer firefighter for more than 25 years with Shawswick Volunteer Fire Department.

“Larry does a lot of work that he does not get a whole lot of credit for and this is one of the ways to acknowledge what he does for his community,” said Bobby Brown, Fire Chief Shawswick Volunteer Fire Department.

Gary Davis with MacQueen Emergency presented Brown with the award.

“Back in 1975 the Global Award was for the Indiana Volunteer Firefighters Association districts, one award given out to each IVFA district to anyone who has made a difference in their community, to promote the betterment of the fire department in their community,” said Davis while presenting the award.

Also during the meeting, Shawswick Volunteer Firefighter Brian Hutchinson received a 25 year pin for service to the department.

“Most volunteer firefighters only commit three to four years of service before calling it quits. To spend 25 years in the volunteer fire service is an accomplishment,” Chief Brown added.