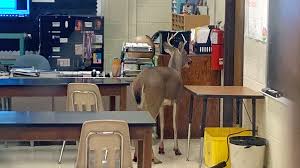 (FORT WAYNE) – Two teachers at a Fort Wayne middle school got a scare when a deer crashed through a window into a science classroom, leaving a trail of blood inside before police helped usher it from the building.

The young buck crashed through glass in the upper part of a window at Blackhawk Middle School about 8 a.m. Tuesday, entering the sixth-grade classroom as the two teachers were inside.

No children were in the classroom at the time and neither teacher was injured during the deer’s intrusion, said Krista Stockman, a spokeswoman for Fort Wayne Community Schools.