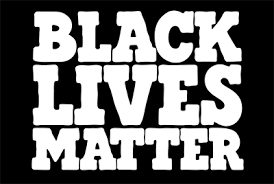 Led by artists Christina Elem and Raheem Elmore, 83 community volunteers participated in painting the mural on October 24.  Proposed and developed by the Banneker Community Center Advisory Council (BCCAC), a resident-led board that reports to the City’s Department of Parks and Recreation, the public art project was approved by the Board of Parks Commissioners, Bloomington Arts Commission, City Council via resolution, and the Board of Public Works.

Funding for the project came from unused municipal dollars originally budgeted and earmarked for the Black y Brown Arts Festival, which was cancelled this year as a result of the COVID-19 pandemic.  As the festival has become a signature component of programming at the Banneker Community Center, an effort was made to repurpose festival funding in a way that would complement Banneker’s mission.

The BCCAC released the following statement:  “The BCCAC recognizes and holds the moral, ethical, and political belief that Black lives matter everywhere and in all ways.  Although we are an individual group and not affiliated with the Black Lives Matter-Bloomington working group, we join with them in a collective effort toward a new season of justice, advocacy, and equality.”

“The City is proud that the words ‘Black Lives Matter’ live on our street,” said Mayor John Hamilton.  “We appreciate the residents who led this public art project and the many who helped bring it to life, and we look forward to continuing to engage with residents to live out the words in actions, to continue to address long-standing issues of racism and discrimination in our community.”