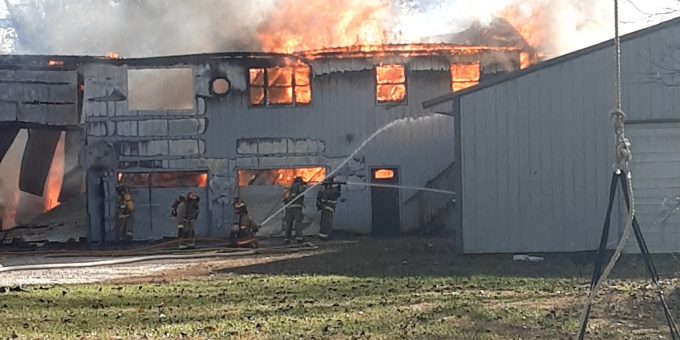 (LEESVILLE) – A family of six lost their home Monday afternoon.

Rachael Johnson had just left to pick up her children from Shawswick Elementary School.

Firefighters from Shawswick, Pleasant Run, Oolitic, Indian Creek, and Marion Township Volunteer Fire Departments as well as Owen Township in Jackson County responded to the fire at 2:09 p.m. in the 800 block of U.S. 50 East, near Leesville.

“When we arrived the fire was already well involved and we attempted to make an interior attack on the fire. However, the roof collapsed and we shifted our focus to a defensive mode,” said Captain Kyle Brown of the Shawswick Fire Department.

“The home was a two-story pole barn structure and the metal sides made fighting the fire very difficult and hot,” added Brown.

Rachael and the children arrived while firefighters were battling the blaze.

The home is owned by Richard and Rachael Johnson. The couple has four children: 9-year-old Maya, 7-year-old Luke, 5-year-old Eli, and 3-year-old Ilana.

“We have insurance but we will be making arrangements to have a temporary place to stay. At this time we do not know what that will look like but we are just trying to figure that out,” said Rachael.

Firefighters spent over four hours on the scene trying to prevent the strong winds from spreading the fire into a nearby garage which also housed a propane tank.

31 firefighters used more than 45,000 gallons of water, 12 fire engines, a rescue truck, and a command vehicle to battle the blaze.

Firefighters used a water hydrant located on U.S. 50 near Plaza Motel. Several fire engines were seen on both sides of a busy U.S. 50 waiting to load up their fire engines and shuttle water back to the fire scene.

Firefighters rotated in and out due to the extreme temperatures while battling the blaze.

A portable cascade system was brought to the scene to refill firefighter’s air bottles.

There were no injuries to any firefighters during the operation.