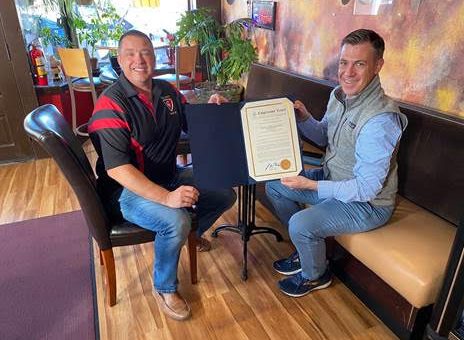 (WHITLEY CO.) – Congressman Jim Banks (IN-03) recognized Lt. Col. Douglas Fahl for becoming the first Indiana National Guard judge Monday and presented him with a piece of the Congressional Record that praised Judge Fahl’s public service as a judge and member of the National Guard.

The congressman also recognized Judge Fahl for his tireless service on behalf of veterans in Whitley County.

The text of the Congressional Record presented to Judge Fahl can be found below.

“Our men and women in uniform need great advocates like Judge Fahl who understand their experiences and can apply the law judiciously. I was glad to make sure Judge Fahl’s service was recorded in U.S. history, so that his contributions to our nation will never be forgotten,” said Banks.

As a practicing attorney of nearly 25 years, Judge Fahl’s record of public service is nothing short of exceptional.

Having practiced law in the United States for over 20 years, Judge Fahl has also been called upon to represent military law across the world, including Guantanamo Bay and Iraq.

In Whitley County, Judge Fahl spearheaded a new veterans treatment court program. Through the program, jurisdictions serve a large segment of the veteran population involved in the criminal justice system. The program has long fostered a better understanding between judges and the issues with which veterans, often casualties of war, struggle. So successful in Whitley County was this program that two neighboring county’s court systems now direct qualifying veterans to Judge Fahl.

In September 2020, Judge Fahl was appointed the Indiana National Guard’s very first certified military judge. Few men were more qualified for such an appointment. Brig. Gen. Bobby L. Christine, National Guard adviser to the Judge Advocate General’s Corps spoke in support of Judge Fahl’s credentials and stated, “Lt. Col. Doug Fahl’s selection to serve as military judge for the state of Indiana is proof positive that the rights of those who defend America will be safeguarded. No finer selection for judge could be made.”

Judge Fahl has served northeast Indiana, and our Nation, with the highest honor and distinction. This record is a testament to his tireless commitment to the people which make our country great and ideals to which our Nation strive.