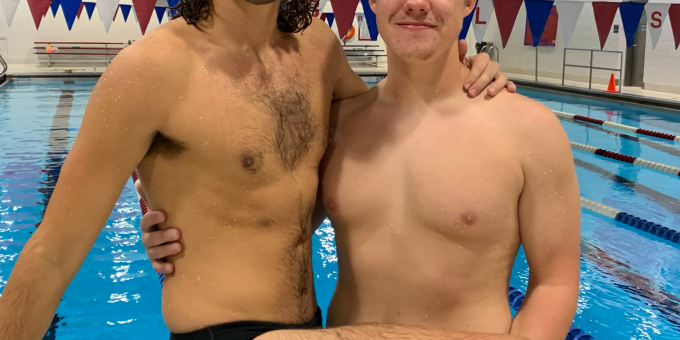 BEDFORD – The grind is under way. The daily dip in the chlorine bath. By the end of the season, everything will smell like, taste like and feel like the germ-terminating chemical. Maybe that’s the secret weapon against the virus. It kills other bacteria and viruses.

But it doesn’t kill fun. Bedford North Lawrence seniors Adam Tlustek and Isaac Williams will make sure of that. This is their last splash. They intend to enjoy the moment, as long as it lasts.

BNL started official practice sessions for the 2020-21 season, and the water is probably the safest place. The Stars will definitely spend a lot of time in the pool, looking for ways to replace a lot of wins and points among the departed from a year ago.

“It will be a fun one,” Tlustek said. “We have hard workers, too. That will show up in the next month or two. We need a lot of hard work. Every time you hit the water, give it your best. The results will show.”

BNL graduated a huge chunk of its successful foundation. Eight swimmers, including record breakers, qualified for the state finals. Their names now stand out on the record board that hangs on the wall above the pool.

“Losing that group, all that means is maybe we’re not breaking sectional records and crushing races, but we can still win them and be extremely competitive,” first year head coach Adam Young said. “As far as the amount of points we score, I would expect us to be right there.”

Experience will be a factor. Tlustek was a member of the 400-yard freestyle relay that qualified for the state meet. Juniors John Allen and Alexander Swenson got dunked into that deep water as well, and sophomore Cole Baker is back after coming from nowhere to become a first-year surprise.

“We bought back a lot of points and a lot of speed,” Young said. “I’m excited to get going and see what these guys can do. Will we have the depth to overcome Jasper this year? That remains to be seen.”

Those are the starting points for a slim roster with 11 swimmers and 2 divers.

“We’ll need some help from the underclassmen,” said Williams, in his second year of swimming after crossing over from cross country. “I’m pushing myself to get stronger. It’s time to kick it into overdrive.”

The Stars will start the season at Edgewood on Nov. 24.