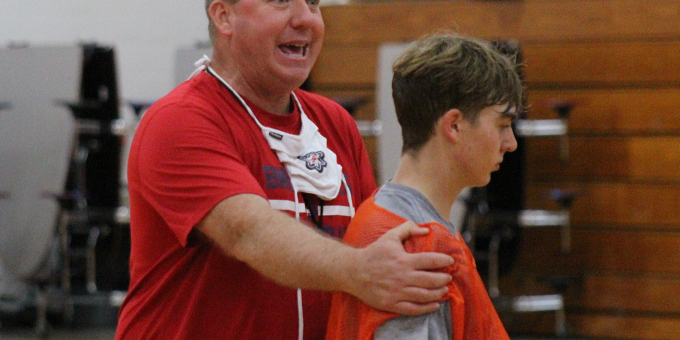 BEDFORD – Kooper Staley’s smile, now filled in front after a teammate’s hard head took a chunk out of his grin during a nasty summer collision, perfectly represents the state of Bedford North Lawrence basketball.

A big gap needs to be fixed, some teeth added to the offensive bite, before the Stars are ready to chew on 2020-21. They got the first taste on Monday afternoon with the official start of practice sessions. Say cheese, time to see how this picture develops.

After graduation took out a huge chunk, BNL has started the restructuring process. With seven seniors and four returning starters, the Stars have the nucleus for a solid attack as Jeff Hein begins his second season at the helm.

BNL won 15 games last year, the most since 2010-11, but lost senior star Brayton Bailey. He averaged 20.4 points, 7.8 rebounds and 5.6 assists, and somebody will have to do a lot of bridge work before the Stars can restore the smile. Can the sum of the parts equal success?

“We’ll be a more balanced team,” Hein said after watching 16 athletes work out in the first of two Monday sessions. The second wave featured 22 freshmen and sophomores. “We won’t have to rely on one guy to do everything like we had to at times last year – to score, rebound and pass. We have a good mix of shooters, players who can score inside, players who can put the ball on the deck.”

The central figures will be the seniors. Staley averaged 8.8 points per game, Cosner contributed 6.3, Jackson Miracle totaled 6.1, and sophomore Colten Leach was invaluable in the backcourt. They’re back, with Leach already going full speed following knee surgery from an injury suffered in the sectional. Aden Pemberton (who worked his way into the rotation late in his sophomore year but missed the entire year last season with a knee injury) has returned.

”These kids have experience,” Hein said. “There’s a lot of seniors, and it’s good to have that. They know what it’s all about. It’s their last year and they want to make the most of it. It’s a unique blend, a lot of personalities. The big thing will be accepting some of the younger kids who will play.”

BNL is making up for some lost time. Many offseason questions would have been answered during the June and summer scrimmages, but those were erased by the virus shutdown. The Stars practiced four times in July, conducted open gym sessions in September, then started conditioning work in October. In addition, 22 of the athletes vying for spots on the basketball rosters were busy playing football.

“We have to work on our conditioning., the football kids specifically,” Hein said. “They‘re not in basketball shape. It’ll take them a little bit to get there. And we’re going back to the fundamentals. We have to get the skills back, the shooting form, and some little things they might have forgotten.”

The final factor is uncertainty. The recent surge in virus cases caused more anxiety about the state of the season. Right now, BNL is on track to begin as scheduled. Of course, that could change.

“Getting to play is exciting,” Staley said. “We didn’t know if we would be able to, so we worked on our own. I think we’ll come together and play more as a team. I think it’ll be a great year.

“With our leadership, it will be getting the younger guys and letting them know we’re bought in. And they need to be bought in. We need everyone together.”

BNL has steps to take. The first will be the intrasquad scrimmage on Nov. 16, the second will be the IHSAA controlled scrimmage with Rock Creek on Nov. 19. That all leads to the opener with Bloomington North on Nov. 24.

“For this team to be successful, we’ll have to defend well, rebound well and have balance on the offensive end,” Hein said. “We can‘t be a one-man show. If we play unselfishly we have a chance to be OK, better than a lot of people are probably predicting us to be.”