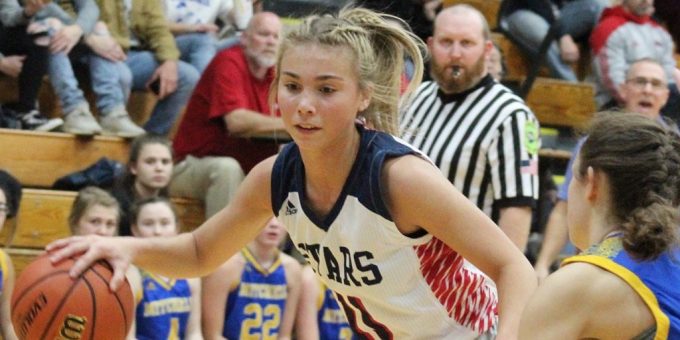 BEDFORD – After working through postponements, cancellations and schedule juggling – which will be the new ‘normal’ for most of this turbulent season – Bedford North Lawrence will make its official debut. Buckle the seat belts for a bumpy, curvy, crazy ride.

The Stars, ranked No.7 in the Class 4A poll, will welcome Class A No.3 Lanesville to BNL Fieldhouse on Saturday night to light the fuse on what should be an explosive campaign. With great expectations and excitement levels, BNL will open with a first-time opponent.

How appropriate, with so many variables and unknown factors ahead, for this game as the opener. It’s definitely not on any original schedule, in fact those should be considered suggestions rather than stone tablets.

BNL was set to meet Mooresville on Nov. 6, and that got moved to later this month. Lanesville was supposed to face Shawe Memorial on Tuesday, and that got cancelled. Both teams were originally set to meet Mitchell this month, and the Bluejackets were forced to erase the entire month when extra-curricular activities were suspended.

Stupid COVID. That will be mumbled quite often. If it hasn’t already.

That’s why these two programs came together. Necessity can create unusual partnerships.

“We’re thrilled they are coming to play us,” BNL coach Jeff Allen said. “Any time we can get on the floor this year, it’s going to be a blessing. So we’ll relish that.”

BNL might not relish this later. Lanesville is no pushover. In fact, the Eagles are coming off their best season ever (23-4 with a sectional title), return their two leading scorers, and have a state championship coach with a familiar name at the helm. Be careful what you wish for.

Angie Hinton, who guided New Albany to the 4A state crown in 1999 and has been successful at every stop during her 14 years on the sideline, is in her third year with Lanesville. She will feature scoring leaders Gracie Adams (17.5 plus 8.0 rebounds) and Linzie Wernert (11.0, 6.0 boards) in her attack.

”For us, every game is not about the opponent we’re playing, it’s how we’re playing. Are we going to play the way Lady Stars play? That’s the focus on Saturday. Are we doing what we’re supposed to do to compete at a high level, no matter who the opponent is.”

BNL could be hard to contain. The Stars will start with seniors Chloe McKnight (14.1) and Irye Gomez (12.5) in the first wave, then add sophomore Karsyn Norman (8.5) and electric rookie Chloe Spreen (rated among the top freshmen in the nation). They plan to play fast, loose (after hitting treys at a dizzying pace in the two scrimmage workouts) and relentlessly with pressure to offset a lack of interior size.

The Stars will not be at full strength as seniors Makena Moore and Grace Kinser are still sidelined in quarantine after possible virus exposure. They will also have to complete the required number of preseason practices once they are cleared to return.

“I wish we had Makena and Grace, but the team has grown already,” Allen said. “We’ve had great practice sessions and the kids have had great enthusiasm, great focus. As a high school coach, they’re young kids, and you’re really fortunate to get a group that practices as well as this one does.“

The clash with Lanesville will be varsity only. Tickets will be available at the door, with capacity inside BNL Fieldhouse limited to 1,000 spectators. Masks and social distancing will be expected.

Game notes: Lanesville coach Angie Hinton is 41-11 in her third year with the school. She’s won 214 career games in 14 years and guided New Albany to the Class 4A state championship in 1999.