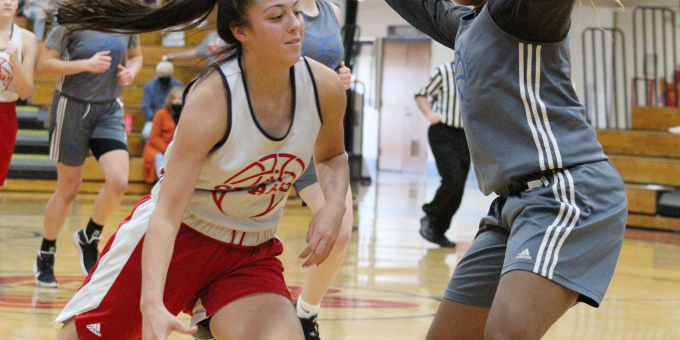 BEDFORD – Success, according to author and motivational speaker Zig Ziglar, means doing the best we can with what we have. That describes Bedford North Lawrence perfectly as the Stars prepare for the most unpredictable season ever.

Some things, like death and taxes, are certain. BNL, coming off a run to the Class 4A semistate last season, is going to be good – extraordinarily exceptional, in fact – and contend for the usual conference and sectional titles in 2020-21. The Stars are loaded with talent, experience and determination.

What they don’t have is size. They have more guards than a prison, but lack a powerful post presence for the first time in a decade. They have no way of knowing if, or when, the unrestrainable virus might lock them down. They will just do the best with what they have.

And that might be good enough to be special.

With six seniors, with one of the best freshmen in the nation, with three returning starters, with a burning desire to be great, the Stars will chase dreams and championships. Last year’s run to the Class 4A final four, and loss to the eventual state champion to conclude a 21-6 campaign, has fueled the fire to compete for the grand prize.

“We’ve been to the semistate,” senior Irye Gomez said. “For us this year, it’s about time we go all the way and try to win it.”

BNL will certainly have the firepower. The returning cast will include senior Chloe McKnight (14.1 points per game last year), Gomez (12.5) and sophomore guard Karsyn Norman (8.1). The depth will come from seniors Jenna Louden, Haley Deckard, Makena Moore and Grace Kinser.

“It helps a lot, when you have young kids coming in that will see some minutes, to have those older kids in front of them showing the way a little bit,” BNL coach Jeff Allen said. “They will be a great positive force.

“It’s their maturity. Their leadership (from McKnight and Gomez) has been outstanding. When you combine that with the skill they have, it makes them even more dangerous. They’re developing an understanding of how the game needs to be played and how they can be successful.”

And then there’s the X factor. Freshmen sensation Chloe Spreen, who already has multiple Div. I offers and a spot among the nation’s elite (according to ESPNw), will be a weapon. She has already sparked comparisons to legends. She could easily grow into that.

“First and foremost, I want her to be Chloe Spreen,” Allen said. “That’s what I want. She’s an exceptional athlete, she has a great skill level. But she’s a freshman and she’s learning. Her ceiling, as far as her ability level, is really high.

“There’s a lot of roles she will have to play, in different areas. There’s a lot of learning and sometimes you can see the wheels turning in her head. That’s typical for a freshman. As she gets more comfortable and works her way through it, she will be somebody who is a big factor for us.”

None among those mentioned cracks the 6-0 barrier. That could be a shortcoming, although BNL plans to attack with speed and relentless pressure. Time waits for no one, and the Stars don’t have time to wait on slower opponents. The issue facing BNL will be defense and rebounding.

“We have guards this year,” Allen said. “So every guard has to be a rebounder. It’s going to elevate us to compete at the high level. We just have to work harder. That’s the bottom line. Physical size has a lot to do with it when you’re right under the rim, but if you take a talented athlete and instill the work ethic they have to have to compete, they can get it done.

“The kids have bought into that. They understand it’s basically heart and effort, and we’ll have to outwork people around the board.”

Rebound. The Stars will probably tire of hearing that repeated refrain.

“It’s definitely a big deal to get rebounds and play good defense against good teams,” McKnight said. “We try to push it up the floor and not wait on anybody. We’ll try to keep them off balance.”

BNL’s schedule has already been altered because of virus problems. The original first two games have been postponed (Mooresville) or cancelled (Mitchell). The Stars will now start with Class A No.3 Lanesville (one of seven ranked foes on a tough schedule) on Saturday.

The Stars are ranked No.7 in 4A in the preseason poll.

“These kids have goals, and we have the chemistry and skill level to play at a really high level. We’ll have to have a little luck along the way, but I believe we can make a deep tournament run.”