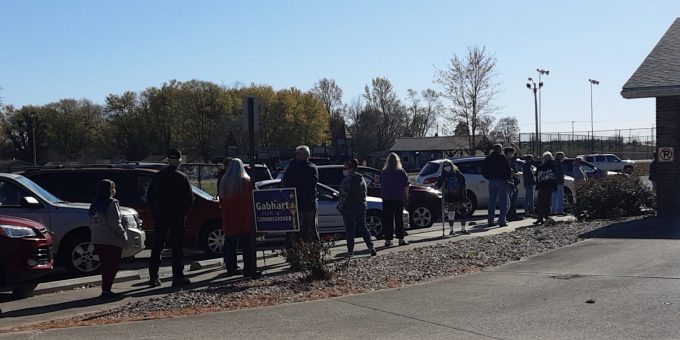 There were no issues reported at any of the six voting centers.

More than 15,000 voters cast their ballots early or sent in absentee ballots.

There were seven poll workers at each of the six voting centers in today’s election.

In order to count absentee ballots, a total of 14 poll workers started at 8:00 a.m. this morning, with more than 3,800 of those ballots turned in last Saturday.

In addition, three election board members, a Microvote technician, and the clerk’s and voter registration office staff are used to get the absentee ballots counted at the close of election day this evening.

Results from this evening’s election may be slower than normal due to the higher number of absentee ballots.

Lines were moving quickly at all the voting centers with 10 voting machines at each polling place. “So far we have not had any complaints on any slow-moving lines. Our vote centers staff move voters as quickly and efficiently as possible,” said Heather deal Cruz Lawrence County Voter Registration.

The eleven candidates in the heavily contested North Lawrence Community Schools Board race were campaigning for votes today. Three of the eleven will be chosen to serve on the board in that race.

Andy Ruff, Democrat Candidate for Indiana’s Congressional 9th District, made a stop in Lawrence County as he made his way through the district campaigning in the final stretch of this year’s election.

The weather cooperated with voters and candidates alike making voter turnout exceed averages across the State of Indiana. We will have complete election coverage for you this evening.